Another perfect day, and the forecast is for more of the same. My first rainy week is now forgotten as well as forgiven.

Today we did a couple of the Montmartre walks in CityWalks Deck: Paris. Each walk is on a separate card with a map on one side and a description on the other. Despite the fact that the cards contain only so much information we’ve found it a good way to identify interesting walks and a convenient way to follow them. City Walks Decks are also available for other major cities, such as New York and London. I find Sacre Coeur somewhat kitschy and its environs maddeningly touristy, but the slopes of “la Butte Montmartre” get more interesting the farther you get from the church. 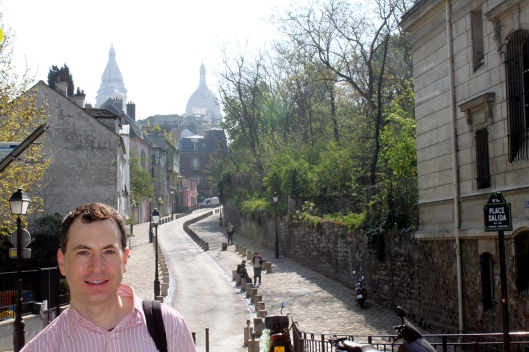 Jason on the slopes of Montmartre.

It looks as though an agreement has been reached to ease the European travel ban, so we now expect that Jason will get home on Friday.