L’île Saint-Louis and l’île de la Cité are islands in the Seine at the historic center of Paris. L’île de la Cité, where Notre Dame cathedral is located, is the original cradle of the city, known in Roman times as Lutèce. Apart from Notre Dame, and Sainte Chapelle, it is mostly occupied now by imposing and rather sterile government buildings. L’île Saint-Louis was created by enlarging a smaller natural island in the 14th century. It is mostly residential. It retains a relatively quiet atmosphere even though it also has many tourist-oriented shops and restaurants.

Jaime and I started our day by wandering around both islands, eventually getting lunch on L’île Saint-Louis and eating it in a little park on the eastern point of L’île de la Cité, behind Notre Dame. We noticed a sign for a memorial to the people who were deported from France by the Nazis, Mémorial des Martyrs de la Déportation. On other occasions when I had been there it had been closed, but today the gate was open and a guard was controlling access so we went in. You enter the small site through a narrow stairway, then you reach an inner area through a narrow gate, both claustrophobic features evoking the experience of confinement.

Inside there are symbolic cells, with bars, and in the center a long corridor lined with 200,000 lighted crystals memorializing those who were deported and killed (mostly Jews but also including others the Nazis considered undesirable, including homosexuals). To my own surprise I was moved to tears. 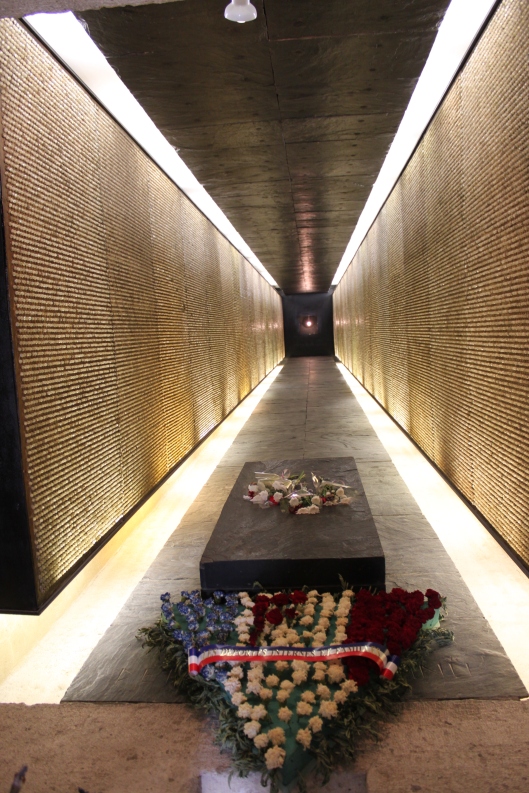 Our afternoon was at the Musée d’Orsay.  Even though I had spent several hours there with Jason I still saw lots of new art, including an exhibit on Crime and Punishment that was colorfully grisly.  And it was all new to Jaime.

Dinner was at a charming if touristy restaurant on L’île Saint-Louis named L’ilot Vache with friends of his sister, who proved to be ladies of a certain age whose travel credentials eclipsed even our own. We ended the evening with a companionable glass of wine with my Parisian friend Hugo.