Another perfect, warm day. I changed my flight home to a later time on March 31. The flight attendants are striking against British Airways during that period. My flight was marked uncertain but the later one was marked definite, so I decided to go with the better bet even though it gets me in a few hours later.

Lunch was with Taline, a friend from Boston, at Café de l’Industrie.

Their brunch last week was so-so but I had a bass filet that was delicious. 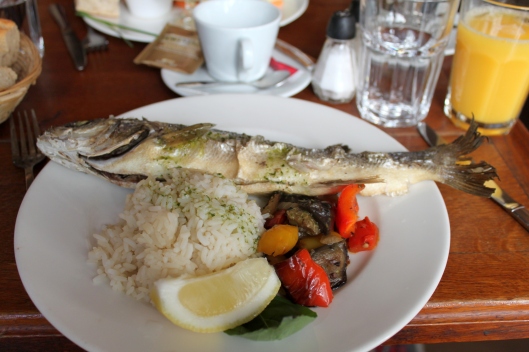 The service was spectacular — attentive, friendly, yet not intrusive — especially surprising since we made pests of ourselves by sitting alone near the window in the back room.

After that I walked around the Bastille area, which is growing on me more and more, then along the Promenade Plantée to Reuilly, then down to the Parc de Bercy which Cort and Julien had introduced me to yesterday. After a gelato I Métro-ed up to Canal Saint-Martin to meet Lisa at Chez Prune. We had a good catch-up, then met up for dinner at the Hotel du Nôrd with her partner Ali, and her mom and dad, Jackie and J.F.

J.F., Jackie and Lisa at the Hôtel du Nord on the Canal Saint-Martin.

It was good to see them again, in the case of J.F. for the first time in some years.

The scene along the Canal was very convivial, a happy apéro geant without even needing Facebook.

I strolled home through the Marais, enjoying the crowds spilling out onto the sidewalks from the many gay bars.

1 thought on “Friends and Family on a Perfect Sunday”