There are a few things to keep in mind when you visit your first Paris (or, really, European) apartment. Each is trivial but at some point you will have to learn about it. So you might as well read this post rather than making each of these mistakes yourself, as I have over the years.

When? Your host may invite you to arrive at something like « 18h » or « dix-huit heures ». You doubtless know to subtract 12 from a 24-hour time, so that means 6 pm. It’s equally likely, however, that your host will simply ask you to come by at “8”. Don’t subtract 2! Although this seems easy both I and several friends have managed to get scrambled, by forgetting to subtract 2, subtracting 2 twice, etc. etc.

I’m told that the French often arrive one or two hours after the stated time, even for dinner. Most of my friends, however, expected me at or shortly after the time they mentioned.

Where? Google maps makes finding addresses much easier, but it isn’t always accurate. Make sure to correctly enter « rue », « boulevard », « faubourg de » etc. Another trap to be mindful of is the fact that odd and even street numbers in Paris may be wildly out of sync. Make sure you’re looking on the same side of the street as you search for the number! If the house number includes a « bis » this will be a different door next to the one with the main number; it’s like our “47A”. The word « ter» is similar, but two doors over.

Break the Code! You will usually be given a code to type into the keypad at the front door. If you get it right there will be a buzz or beep of some kind and you can open the door. Sometimes there will be a button for your host to buzz you up. Or, I suppose, a doorman!

Watch Your Step! The treads will be rock solid, but they may be old, worn and irregular in both height and depth.

How High? Your host will tell you the floor to go to. Try to confirm whether your host is giving you the French floor, e.g. « 3ème étage », or is “helpfully” translating to the American system. If the former, climb that many flights of stairs, since the ground floor or rez-de-chaussée isn’t numbered. If the latter, one less. 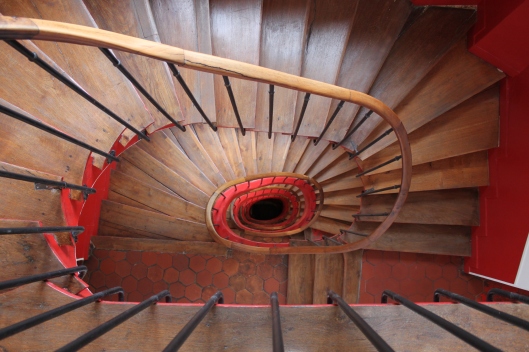 The view from the 5ème étage.

Aerobic Tip: If you’re not used to climbing so many stairs, start breathing a bit faster than usual — not hyperventilating! — when you begin to climb. This will help keep you from getting winded.

Doorbells. There will sometimes be a doorbell (not lighted). In my experience they rarely work, although that may reflect the class of apartment I’ve been renting, and the class of my friends! If it doesn’t, text your friend to say you’re outside the apartment door.

Trapped! At some point, however lovely the visit, you will want to leave. The outside door will not open when you push or pull on it! Look around, however, for a button several feet from the door marked « Porte ». Push it and when you hear some sort of buzz or beep the door can be opened.