On Saturday Zhizhong and I took a train to the nearby town of Auvers-sur-Oise, where Vincent van Gogh spent the last two months of his life. He lived in a tiny garret in this rooming house, which you can visit for 6 euros. 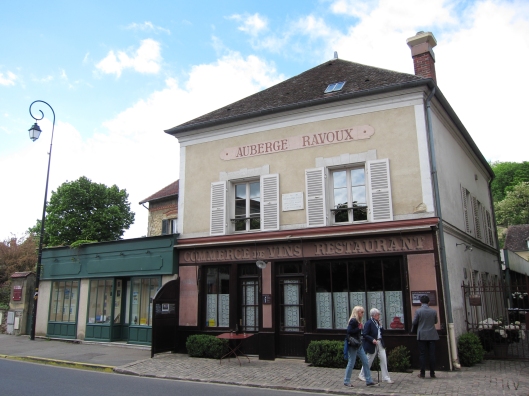 The rooming house where van Gogh spent the last two months of his life, and where he died.

Auvers-sur-Oise is a lovely place, very little changed from when van Gogh lived there. Throughout the village there are signs at picturesque spots showing van Gogh’s painting of the same scene.

Zhizhong and me with the church at Auvers-sur-Oise and a sign showing van Gogh’s painting of the same scene.

The Château offers an odd but impressive multimedia presentation of the 19th century milieu of the Impressionists. And it has a lovely garden, full of irises which we were lucky to see in full bloom.

Vincent van Gogh killed himself in 1853 in a fit of despondency. His loving and supportive brother Theo rushed to his bedside and was there when Vincent died. Theo himself died the following year, and they are buried side by side in the village’s cemetery. 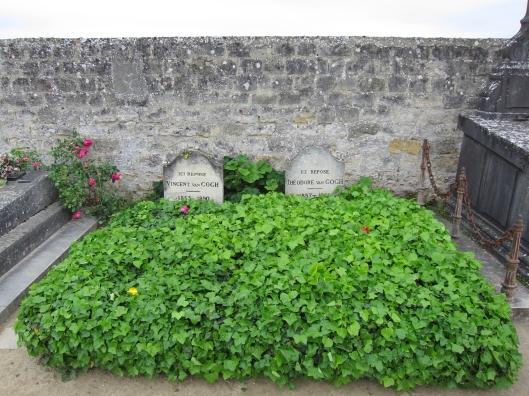 The deaths of the two brothers struck a somber note, but really the visit is all about the wonderful art that Vincent created, and the beautiful relationship he had with his  brother. I had previously thought of van Gogh as the classic example of a starving artist to whom recognition came too late, but in fact his work had been very well received in Paris in the months before his suicide. His life was lost to the depressive phase of his bipolar illness, not to the world’s failure to appreciate his genius. If you visit Auvers-sur-Oise check the schedule for the express train, which takes just 30 minutes. There are several other options, but they take about an hour each way. My full photo set on our visit to Auvers-sur-Oise is at this link: A van Gogh Pilgrimage Photo Set.