One of the coolest things I did last year was to help Matt and Chris host a dinner party for Antoine and me. It was great fun, so Jared R and I decided to take it to the next level and host a dinner party for six! Our guests on Wednesday evening were Jared W, Bertrand (Jared R’s friend from his college semester abroad), Zhizhong, and his friend Guillaume, whom I had met last year at Paris Pride. We cooked cod and coquilles Saint-Jacques (scallops), with rice and a salad. I proposed that we add a cheese course, which was a huge hit with our French guests. Guillaume brought a bottle of wine, Zhizhong brought a strawberry tart for our first dessert, and Bertrand brought some authentic Breton nougat as our second dessert. I was too busy to take food pictures but here we are after the main course. 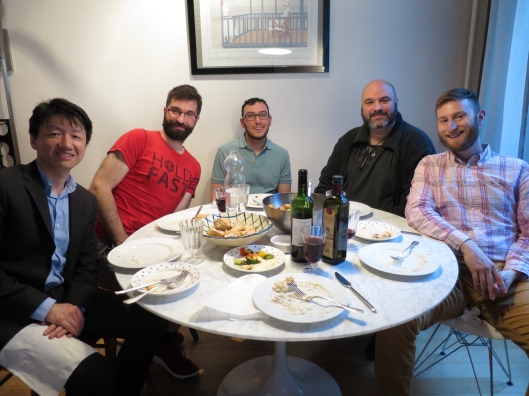 One point of particular pride is that our dinner table conversation was in French. I’m sure our guests were taking pains to speak slowly and clearly, and Jared R did have to translate for Jared W or me a few times. But on the whole the discussion flowed freely. I shudder to think what our accents must sound like to the Parisians, but they claimed to find them charming.

On Thursday Jared R rented a bicycle and rode to Versailles and back. He didn’t have enough time to go inside but he explored the garden thoroughly and enjoyed the adventure. I went instead to the Salon de Montrouge, a show for young contemporary artists that I try to see every year (see my previous post). That afternoon I met a young man who had just finished his final exams in an international program, taught in English, at the Sorbonne. We plan to meet again and at some point a photo may be in order.

That evening Jared had a hankering to eat at a classic French spot. After failing to get reservations at a few swanky places I suggested Brasserie Julien, which has a traditional menu and gorgeous decor, and is only a four minute walk. It was exactly what Jared wanted, and we both enjoyed our meals.

Jared R with his tarte fine dessert at Brasserie Julien

At the end of the meal, however, I started to get a stomach ache. I’m not sure whether it was something I ate or the powerful anti-inflammatory I had been prescribed for my heel (which worked like a charm). Whatever the cause, I was sick for the next 36 hours. This was a disappointment because I had planned to go to Fontainebleau and Vaux le Vicomte the following day with my old friend Manu. I had reserved a car (despite some concern about the availability of gasoline), but I had to cancel. Fortunately, he was able to go by train. and I should have another chance at Fontainebleau in June.

On Friday the Jareds took the TGV for a weekend in Strasbourg while I nursed my digestive tract at home. By Saturday morning I was feeling much better so I blogged and did some shopping. That evening I was finally able to catch up with Manu for apéro at my apartment and dinner at a pretty basic Thai place on rue Montorgueil. He’s off in the morning on a road trip with an old friend to Picardy.

On Sunday I felt a lot better, but it was wet so I had another quiet day. That evening I saw a remarkable movie, the rape comedy Elle, directed by Paul Verhoeven. I have reservations about whether the project should have been undertaken at all, but I have to admit that the movie is lovely, well-acted, scary and funny. Isabelle Huppert is simply superb.

Mot du jour: « coquilles Saint-Jacques », “scallops”, but there’s a nuance: the French use this for all kinds of scallops but strictly speaking it refers to just one particular type. Thus you will often see this in big print on a frozen meal with an asterisked note disclosing in tiny letters the actual type of scallop. Needless to say we served the real thing at our dinner party.