Many Paris restaurants allow online booking on the TripAdvisor-owned website (and app) The Fork, and not infrequently substantial discounts will be offered there.

I had so many great meals in Paris the past few years that it’s difficult to select just a few restaurants to recommend. But here are some relatively inexpensive favorites:

If you feel like spending a bit more — but not insanely much — here are a few fancier options. You will find more tourists here, but they are busy for a reason.

For a special occasion, when cost is no object, I can suggest two restaurants where I’ve had extraordinary experiences:

Suggestions from other sources, that I haven’t tried myself:

Michael and I chose Friday for our visit to Monet’s house and gardens at Giverny because it had the best forecast, partly cloudy with no rain (hah!).

Transport glitches — feel free to skip.  Giverny is about 45 minutes by train (to Vernon) then a local bus.  It sounded simple, but we encountered some transportation issues. The first was the fact that Giverny is not in the Ile de France (the region around Paris) so we had to buy our ticket from the national SNCF, rather than from the regional Transilien system that I had been using for other day trips. Michael’s Swedish credit card came with a chip (puce) so we were able to use the ticket machines, but Vernon wasn’t on the list of destinations for the Transilien machine. We got in the long line at the Transilien ticket counter but fortunately we didn’t wait long because there was a big sign explaining where to buy tickets to Giverny. There was another glitch after we bought the tickets from the SNCF machine. In France you have to “compost” the ticket by inserting it into a different machine before getting on the train. We each dutifully composted our tickets before realizing that one was for both of our trips from Paris to Vernon and the other was the return ticket. I held on to both tickets in case there was an issue on the return train but in fact tickets were checked on the outbound leg but not for the return. When we arrived in Vernon nearly everyone on the train got in line for the local bus. The bus filled very slowly, then left. Fortunately there was a second bus, which also filled very slowly, then also left. We, along with perhaps two dozen others, were still in line, and there were no more buses. We ended up waiting nearly an hour until one of the buses returned again from Giverny, after many failed inquiries, calls to taxi companies, etc. (Another option was to rent a bike but the clouds had been gathering all morning and I had an intuition — which turned out to be correct — that the ride back would have been awfully wet and cold.) Once the bus finally arrived there were no further glitches until the return trip, which arrived seconds before our train to Paris was scheduled to depart. But instead of stopping at the station the bus continued slowly along the fence between the road and the tracks, to the considerable distress of several passengers! But all was well, since the bus pulled up to a gate and an official opened it up to let us walk directly onto the train without even going through the station. The assumption, probably correct, was that we all already had return tickets.  Nobody composted, and nobody seemed to care.

When we finally got to Giverny rain had started in earnest so we went first to the Musée des Impressionisms, gambling (unsuccessfully) that the rain might have wound down by the time we finished. We saw a good exhibition on Bonnard’s years in Normandy, but there’s no permanent collection so make sure you’re going to like the exhibition before going.

Monet’s house was mildly interesting (also dry!). I had read about the fact that Monet took an interest in Japanese prints but I was surprised by the large and excellent collection of Hiroshige and other Ukiyo-e artists. A recreation of Monet’s studio was lined with replicas of his masterpieces, but the Japanese prints afforded a more authentic aesthetic experience. Photos were prohibited inside the house but I bent the rule to shoot the gardens from a second-floor window. 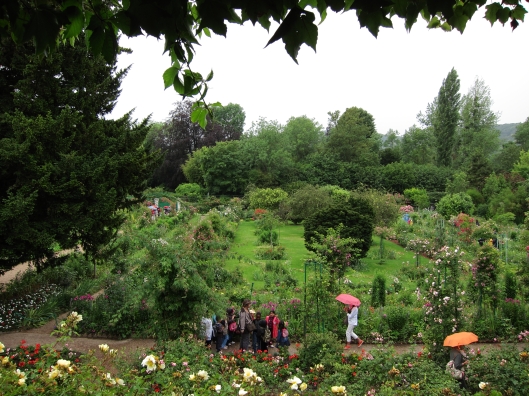 Monet Garden from Window of House

Monet’s water gardens, with the famous water lillies, were pleasantly atmospheric in the rain.

Water Lillies in the Rain

Monet would have been horrified by the throngs of tourists who mob his otherwise-peaceful gardens, but he would have enjoyed, I think, their colorful umbrellas and raincoats. 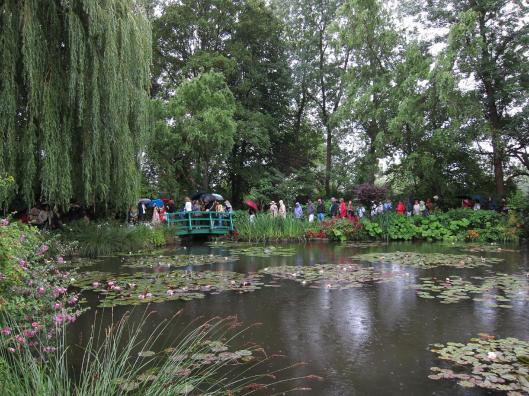 Two motherly Swedish ladies presented an interesting feature of the trip. They sat down next to us on the train, and when they began speaking Swedish to one another Michael couldn’t help introducing himself. We also found ourselves in line with them waiting for the bus, and the four of us were at the front of the line when the second bus left. Naturally we got to talking and pretty much knew each other’s life histories by the time the third bus finally came. We ate lunch separately, but then ran into them in the museum, and from that point on scarcely went fifteen minutes without encountering them again — in Monet’s garden, in his water gardens, in a pub, in the line for the bus back, etc. Giverny is not a large place, so this wasn’t astonishing, but it did seem improbable. When we finally parted in Paris there was a moment when we all silently considered whether to propose an exchange of emails. We mastered the impulse, however, and just said a warm goodbye. (The following day, in a remote non-touristy restaurant, I feigned a startled look and said to Michael, “Would you believe that the Swedish ladies are sitting right behind you?” Fortunately, I was kidding.)

After getting home and warming up we had a drink at Avé Maria, which Michael’s friends Dan and Ric had introduced us to last year. Then, after a map-reading glitch, we had dinner at Le Marsangy (2015 update: under new management and no longer recommended). Michael very much enjoyed his main course, but the pig-stomach appetizer alas proved a bit too adventurous even for him.

Michael with Appetizer at Le Marsangy

I enjoyed the same appetizer I had had the other week as well as my main, and we both liked the atmosphere and service. Even though it was Friday night in the big city we got a good night’s sleep instead of going out.

Friends kept telling me that I should visit the Musée de la Chasse et de la Nature (Museum of Hunting and Nature), so I stopped by on Sunday afternoon. It’s a quirky but very cute little museum, in a beautifully restored hôtel particulier (private mansion) in the Marais. You don’t have to like hunting to appreciate the sumptuous displays of taxidermy and animal-related art (with as much space devoted to the quarry as to the dogs and other animals used by hunters) as well as lots of lovely old guns. There are also quite a few contemporary art pieces interspersed with the more traditional material to keep you on your toes. My only complaint is that so many of the ambitious video elements were out of order. 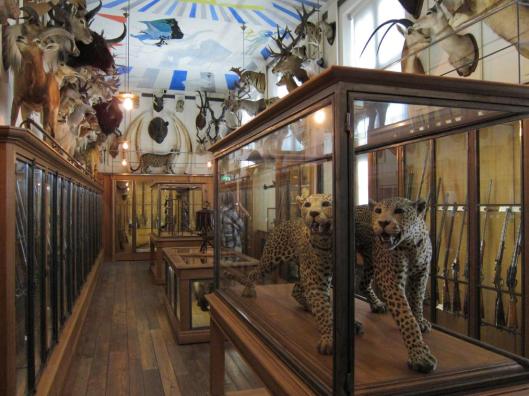 Monday morning I had to work (!?), creating a web page and announcement looking for a new roommate as of September 1. My current roommate is leaving after more than five years to start a tenure-track career at the University of Texas. I’m happy for him but sad about losing his companionship, and a bit anxious (as always) about whether I’ll be able to find yet another congenial roommate.  For lunch I met up with an interesting Parisian sculptor, whose work is shown in a Boston gallery that I have visited.

That afternoon I wandered again around the Parmentier quartier, which is zippy but a bit too edgy for me to feel comfortable staying another year. I had a drink at Avé Maria, which Dan and Ric had introduced me to last year, and dinner at Le Marsangy (2015 update: under new management and no longer recommended), a charming neighborhood restaurant serving traditional cuisine. The service was impeccable: I had the impression that the entire operation is composed of the chef and the waiter, and that they have been doing this for a long, long time. Not to be missed is the millefeuille d’avocat aux écrevisses, which was as good as it looks: 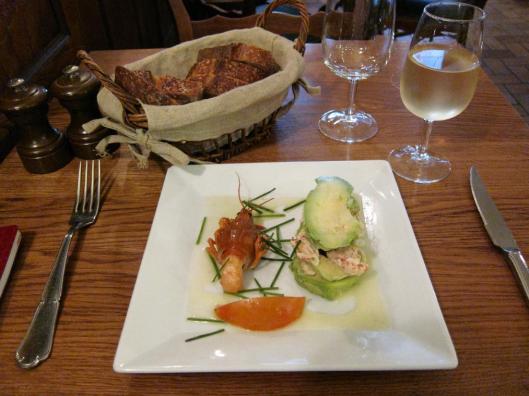 mot du jour: “sanglier”. French for “wild boar.” What I hadn’t realized is that these guys can be quite fierce. In classical times they were considered as formidable as the wolf, bear or lion. And they are rather common in the countryside; we didn’t see any at L’Ejumeau but we saw lots of places where they had been rooting around. Lisa’s aunt Sofie told us that the locals call them “cochons” (pigs)  instead of “sangliers,” but she was at pains to clarify that the term was used purely descriptively, without the pejorative connotation that the word “cochon” often has. I had assumed that the etymology of “sanglier” was — rather dramatically — based on “sang” (blood) but fr.wikipedia.org tells me that it’s from the Latin for “alone,” since they are solitary after the first two years. 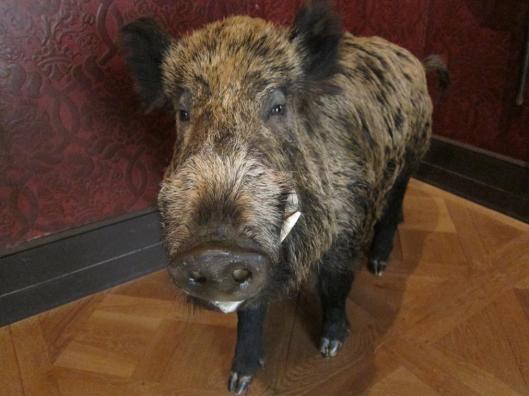 Michael went for a run this morning — all the way to the Eiffel Tower — while I got breakfast ready like a good host.  Then we went out to the Musée Carnavalet (closed for renovations until the end of 2019), a free museum of the history of France that I had never seen in all my time here.  It proved to be a lovely mish-mash of artifacts and art, that I really enjoyed.  Here’s a glimpse, and there are more photos in Paris-13.

We then wandered on through the Marais to Place des Vosges, where we had a picnic lunch.

Then we walked to the Musée d’Orsay, but since the line was too long we crossed the river and visited the Louvre instead.  Even though it was my third time there this trip I still found lots of new things to see and enjoyed myself thoroughly.  For the first time in thirty-some years I saw the Mona Lisa! 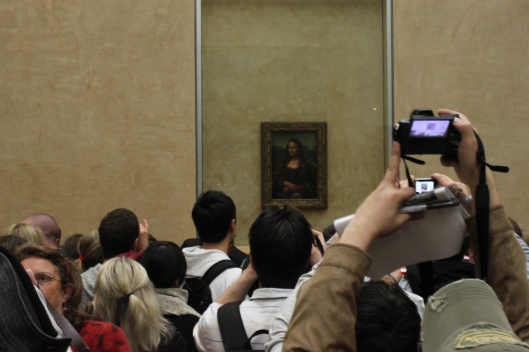 Seriously, though, the museum is magnificent and there are highlights in Paris-Louvre.

We then had dinner at Ave Maria near Oberkampf with an old friend of Michael’s (Daniel), and his friend’s sister and boyfriend (Ric).  We had a great meal, then repaired to a local bar for a few more after-dinner drinks.  Michael and I got home on one of the last métro trains of the night and we’re expecting to sleep very well.