Monday was the last day in Paris for Matt and Chris. Our first plan was to get the view from the top of Sacré-Coeur, but Chris was feeling a bit under the weather so we switched to something that didn’t involve so much climbing: a boat trip on the Seine. It was 100% touristy but actually rather fun. 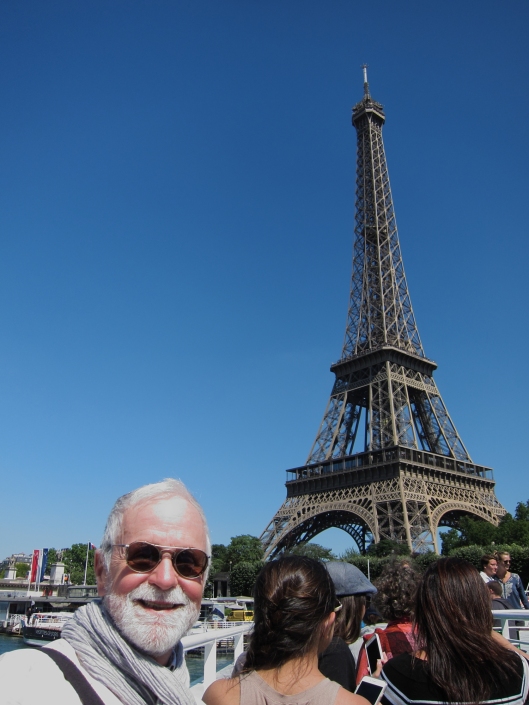 A selfie of me with the Eiffel Tower taken on a Bateau Mouche. Could anything be more touristy?

Detail of the most beautiful bridge in Paris, the Pont Alexandre III. You can’t get this view from shore.

Revisiting from the water side so many buildings we had seen from the land made this a rather good way to round out their visit. That evening Matt and Chris made their last home-cooked meal – with fresh pasta from a market on rue Montorgueil — and I headed out to meet  my nephew’s girlfriend Gillian, her mother and her brother Rob for dinner. Gillian had been traveling through Europe for weeks, and her mother and brother had joined her in Paris a few days before; this was also their last day here. We met at the Sentier métro station, then strolled down rue Montorgueil looking for a good place to have an apéro. We settled on a corner table at Blanco that was sunny but not smoky. We all had kirs, with different flavors of liqueur. Then we foraged for a meal. We settled on La Faille, a relatively new restaurant on rue Montmartre that I hadn’t previously tried. I was impressed with the decor and the very energetic service. I also liked the way the owner chased away a panhandler who started bothering us. The wine and food were both quite good, and the price seemed consistent with other good restaurants in Paris.

Gillian, with her mother and brother at La Faille on rue Montmartre.

My rouget barbu at La Faille on rue Montmartre.

After wishing them a good trip home to Chicago I headed back to my apartment around midnight. Normally I feel quite safe in the neighborhood, but this evening three young men were loitering around the door to my apartment.

Young men loitering about my apartment around midnight.

I was right to be concerned, since they dragged me away! … to the Experimental Cocktail Club for a couple rounds of creative drinks. (We particularly liked the Old Cuban, and an unusual little chicory-flavored drink that Matt got.)

In the morning Matt and Chris headed back to Boston, after a lovely visit. The apartment is quiet again! But not for long…