The centerpiece of my visit this year was a reunion of Mack cousins at their estate 2-1/2 hours south of Paris, generally for fun but particularly to remember my Aunt Jane, who died in May.  We had all gotten together the previous year at Clear Lake, Iowa, and had an excellent time.  While I could see then that Jane was frail, it had been gratifying how much she enjoyed her growing family, including quite a few great-grandchildren.  One of her last wishes had been that the family would stay close.

I had reserved a rental car — enjoying my renewed comfort with stick shift as well as my European-enabled GPS.  Initially I had expected to drive both ways by myself but as it happened I was able to pick up Amy and Brian at Charles de Gaulle airport and drive them down, and I also drove Jackie and Lisa back up to Paris.  I enjoyed the company and it was nice to put the car to such good use.  (One annoyance was a pebble kicked up on the expressway that put a 700 euro crack in the windshield — here’s hoping Visa comes through on its auto insurance coverage!)  After an otherwise-uneventful drive it was lovely to see L’Ejumeau again: 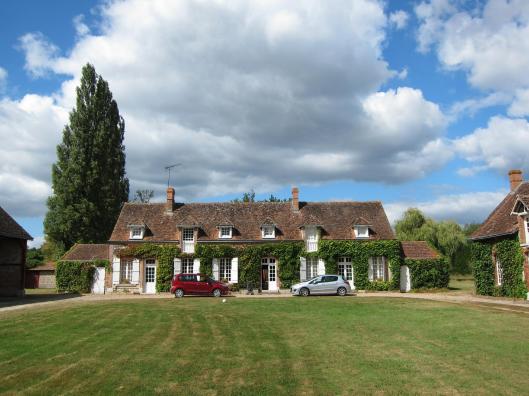 The house sleeps 14, but we were nearly twice that, so we also filled two nearby houses owned by family friends.  I soon spotted a critical issue: we had many thirsty Macks, lots of warm beer, and only a small refrigerator, already full of food.  Obvious solution: a couple of cooler chests filled with ice. Easier said than done!  First, nobody at the hypermarché had ever heard of cooler chests, even after I described the concept in crystal-clear French.  Undaunted, I bought several plastic clothes boxes that looked waterproof, despite also being flimsy and uninsulated.  Then I asked where I could buy ice.  Answer: nowhere!  Further answer: nowhere, except, just possibly, if I pled my case sympathetically, the fish department in the hypermarché might make extra ice for me to pick up the following day.  Result: cold beer!  And also a fun travel adventure. 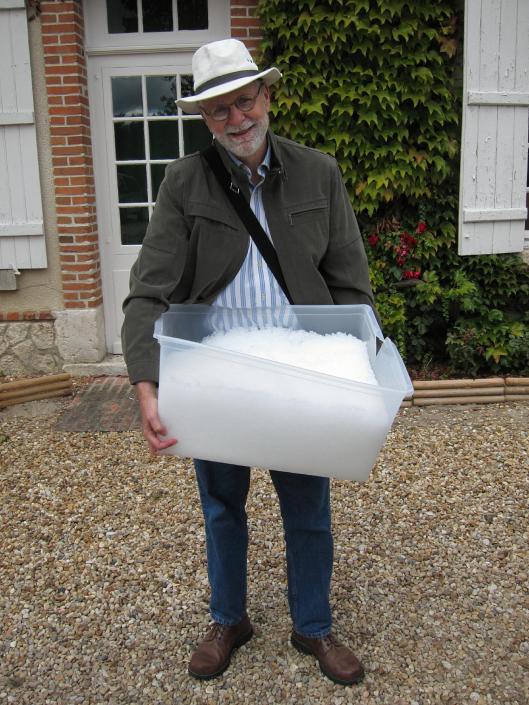 The babies from Clear Lake — Ethan and Lilly — were running around this year, and Val’s twins were getting ready to join them.  Almost enough to make me want babies of my own!  Err, but not quite…

Moms (well, mostly) and Their Babies

The memorial for Jane Mack was moving as well as surprisingly fun.  We lit five candles, to reflect grief, courage, our memories of Jane, love and hope.  (I was touched to be invited to light one of them, which I did for Nancy’s family as well as for my brother Steve, sister-in-law Noree, and nephew Andy.)  We sang happy songs that Jane had loved, and more serious songs composed for the occasion, all led by Judy on her guitar.  There were many amusing and touching reminiscences, including a recording of Jane’s own family memories.  I realized that I probably knew Jane the longest of anyone there, since I’m a couple years older than Jackie and Judy.  The proceedings were powerfully moving, yet rigorously secular, because that’s what everyone wanted, as well as what Jane would have wanted.  I mentioned how well this fit with the principles of Humanism but my cousins were more interested in living the way they saw fit than embracing a label.

The high point of the visit — in more ways than one — was an ascension in a Montgolfière (hot air balloon) over Château de Chenonceaux and environs.  One photo will give you a taste (though it’s a different château).

Château and Shadow of Montgolfière

There’s a full photo set at this link: Montgolfière Photos.

Dropping off the car was once again stressful, since there was a demonstration at Place d’Italie that brought traffic almost completely to a stop.  At one point I was closing the gap with the car in front when a motorbike passed me on the right and cut across the closing gap to the other side of the car in front of me; I slammed on my brakes to save him; luckily the guy behind me was on the ball and didn’t rear-end me.  I ended up returning the car to the same obscure garage near Gare Montparnasse that Jared and I had found a few days previously.  It was a relief to get back to Lisa’s and Ali’s to join Jackie and David’s family for a farewell Chinese dinner, bien arrosée in my case at least.

Today I’ve done nothing but laundry, blogging and a little reading.  A day of downtime is just what the doctor ordered!  Gerry arrives tomorrow morning, for his first visit to continental Europe.