Wednesday evening I went to an indie movie, Lacrau, at Le musée de la Chasse et de la Nature, a quirky but interesting museum in the Haut Marais. The young Portuguese director was there, and when he took questions after the movie I was delighted to find that I understood everything! But only because his French is about the same level as mine. At the wine reception after the movie I had a nice conversation with him about, among other things, Henry David Thoreau.

One of the director’s friends, also from Portugal, made an interesting remark. He has been living in Paris for four years, with his French girlfriend. He observed that the French are more like the Japanese than they are like Americans or other Europeans, in that they have an elaborate cultural code which is equally rigid, and equally difficult to grasp. I think he probably exaggerates, but the parallel is interesting, and might go some way to explain the mutual infatuation between France and Japan.

I had learned about the movie from Lisa’s great friend, Eve Couturier. I had a brief opportunity to catch up with her, but I was sorry to learn that she will not after all be able to join us for Sunday lunch at Lisa’s.

On Thursday, after blogging, I went to a matinée movie at a cinema in the sketchy Château d’Eau neighborhood of the 10e. I felt safe in the daytime but I would be cautious about going there alone after dark. 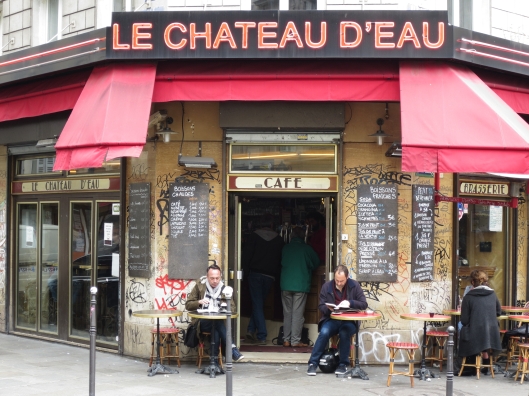 I noticed that the barber shops were offering men’s haircuts for 8 euros, even less than I pay in Central Square! A few days before I saw that barbers in the wealthy 16e generally quoted around 31 euros. I wonder whether one could construct a useful socioeconomic map based on haircut prices? The movie was French Canadian, but mostly in English with French subtitles, so easy to follow.

On the way back I detoured through the Passage de l’Ancre, one of the oldest in Paris, running between rue Saint-Martin and rue Turbigo.

Thursday was a jour férié (holiday) for the Feast of the Ascension. Which, for those whose grasp of Christian rituals may be a bit shaky, is the day when Christ bodily ascended to heaven. It’s a French paradox that a country that fiercely defends laïcité (secularism) nevertheless recognizes many Christian holidays, including not only Easter but also the day after Easter. I followed the sound of a brass band and came across this procession, rather paradoxically carrying a statue of the Virgin Mary.

Thursday evening I finally caught up with my first French friend, Jacques. We had a couple glasses of rosé at my place, which he declared to be a classic Marais apartment. We had diner at a nearby Chinese restaurant where — as at so many places in the Marais — he is friendly with the owners and waiters. There — in addition to welcome and farewell cocktails — we had another bottle of rosé, in this case a “White Rosé” that was clear but with the distinctive rosé taste. At my request, Jacques made sure I got home safely!

Jacques with a delicious bottle of White Rosé at Chez Tsou in the Marais.

It was a real pleasure to catch up with him. We have been friends now for more than four years, despite the fact that our politics are completely opposite.

Jason arrived on Friday morning, but since he’s here now we’re going out to enjoy the day. I’ll post more about his visit when I get a chance.

Jason looking out the window of my 2014 apartment.