I had no special plans for Monday, after finishing my long post about the road trip, so I set off to look for a meal. I wasn’t sure what I wanted, but at length I recalled Boullion Chartier, which Hugo had introduced me to my first year. It’s a Parisian landmark, serving classic French cuisine at reasonable prices. 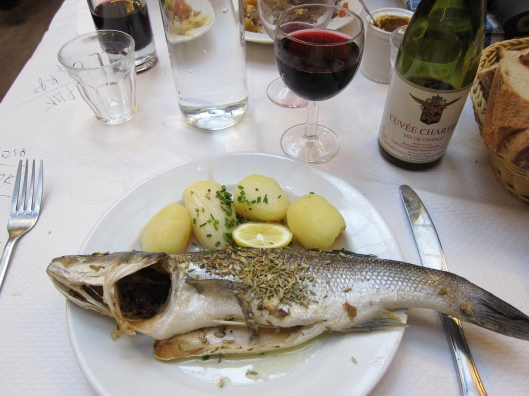 One unique feature is that you are typically seated with other diners. This can make it very sociable when you are alone, if you are lucky. Happily, I was seated with a business professor from Montpellier who was both cordial and interesting (and preferred to converse in French).

The business professor from Montpellier with whom I was seated at Boullion Chartier.

I ended up drinking a lot more wine than I had planned! I ordered a glass of the house red wine, but it turned out that this wasn’t possible so the waiter brought a half bottle. It was really good, for 4.5 euros! Then the Dutch couple at the next table, with whom we had had a pleasant cross-table conversation, treated each of us to a glass of excellent white wine. (The Dutch couple couldn’t believe, in view of our animated conversation, that the prof and I had just met!)

After dinner I strolled back via my old neighborhood, and was impressed by the vertical jungle that l’Oasis d’Aboukir has become, in less than 18 months. 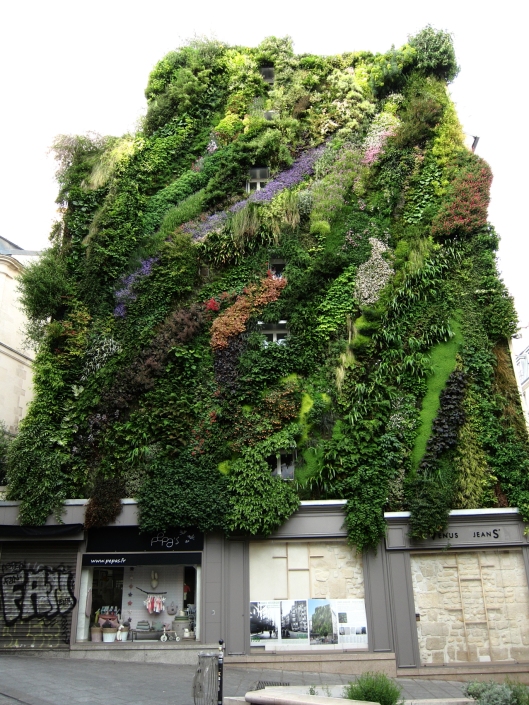 On Tuesday afternoon my first visitor arrived, for a two-night stay. David Ayres practiced law with me in Boston half a life ago. He now lives in Prague, where I visited him and his partner in 2010. He has visited Paris many times so we spent most of our time wandering — through the Marais, up to Parc des Buttes-Chaumont, around Montmartre, etc. etc.

Our second day I gave a short tour of the north slopes of la Butte Montmartre.

Stairway on the north slope of la Butte Montmartre.

Then David led us deeper into the 17ème than I had previously ventured. We ended up having lunch at La Chope Des Vosges at métro Guy Môquet; it was quite ok except for the chilly demeanor of our waiter.

David liked the apartment, and helped me improve its ambiance immeasurably by planting colorful flower plants in the front window boxes, and ensuring that we never again run out of seltzer water.

My spring 2014 apartment, looking lovely after David Ayres helped me plant flowers in the window boxes.

On our first evening we had dinner at JaJa, a restaurant in the Marais that I hadn’t previously noticed. It was pretty good, but perhaps not great value for money. Our last evening we ate dinner at Le Gai Moulin, also in the Marais. The food and service are just ok, but the price is right, and the 100% gay diners can be quite amusing. We ended up getting into conversations, in English, with guys at two nearby tables. Their stories were interesting, though we declined a cordial invitation from one of them to pursue a more intimate acquaintance.

David headed back to Prague earlier this afternoon. We both enjoyed our flânes through Paris, but catching up on each other’s lives and thoughts was the highlight of his visit.

Saturday morning I got in my first lap swim of the trip, at the Piscine Suzanne Berlioux in the Forum des Halles.  It’s a nice pool, but awfully crowded.

Jared Rubinstein arrived around 13h, more-or-less on schedule.  I heard his suitcase rolling on the cobblestones and spotted him out my Montorgueil-facing windows, so the rendezvous was no problem (despite the fact that the buzzer still doesn’t work).  After he settled in we had a nice lunch at Le Comptoir de Commerce, then went on a flâne.  First down to the Seine (by way of an Orange store for him to pick up a French sim card).  Then along the river to Place de la Bastille and along the Promenade plantée, a favorite walk for both of us.  I had been aware that he had spent some time in Paris and knew some French, but I didn’t realize that he had spent an entire school year here, in 2005, and that he is quite reasonably fluent.  He lived just around the corner from the lovely Jardin de Reuilly.

Jared at the Jardin de Reuilly

We continued to the end of the Promenade plantée, about four miles in total, then grabbed the métro back home.  After a disco nap, and a quick bite at a falafel place on rue des Rosiers, we joined a little champagne party at the home of one of his Parisian college friends.  Ari, actually an American expat, is quite a character, but he welcomed me even though I was a stranger in a cosy group of old friends.

There was one bit of travel drama yesterday: an ATM machine ate my debit card.  I put in the card and the machine just swallowed it without any acknowledgment.  I had to call Citibank to cancel it because I wasn’t sure when or to whom the machine might decide to disgorge it.  Locals waiting to use the machines were horrified, since France allows you to have only a single credit card, but we explained that in America there is no such rule, and of course I have other cards with me.  (Citi also is sending a replacement by overnight courier.)  Something similar happened to me in Turkey with a different card, but they shared one suspicious feature: they were both translucent.  Coincidence?  Sinister characteristic of European ATM machines?  In any case I’ll be more cautious about relying on translucent cards on future trips.

Regrettably, I’ve also continued over the past few days to struggle with the server migration that I had hoped to complete before leaving Boston.  Wish me luck!

On yesterday’s flâne I ran across L’Absinthe Café, a neighborhood restaurant that Elliot Marks recommended a few years back.  I have eaten there many times in prior trips, so I decided to stop for lunch.  I stood waiting inside the doorway while a stream of regulars came in, kissed a waiter on both cheeks and were shown their tables.  Finally I asserted my self, said good day and asked for a table.  From that point on I was treated with the utmost courtesy, including many au revoirs on my departure.  But what was the reason for the delay in greeting me? I was of course a stranger; perhaps a bit off-putting, with my imposing beard, odd hat, weathered shoes. But I think there might have been an element of shyness, as well as perhaps a concern that I would prove to be an “ugly American,” aggressively speaking only English. Certainly shy people are not always nice, but is it possible that nice people are always a bit shy?

When I looked at the menu (what we would call the prix fixe menu) I was bemused to see only two main courses – meatballs of some sort (which I avoid) and “filet de vieille.”  To my knowledge that meant only one thing — old lady! — so I unobtrusively looked  it up on my iPhone, which said the same thing! I had to ask whether this was actually some sort of fish, which fortunately it was.  Which exactly I couldn’t say, but it was delicious.

Errors like this are frequent as one begins to learn a language (and fish are especially problematic, since there may be no equivalent word in English).  But as one spends more time in a foreign country one comes to realize that the language actually used is flawed as well.  A continuation of yesterday’s walk took me along Avenue Jean-Jaurès in the 19me.  As I walked I wondered how exactly Jaurès was pronounced, since I’ve never quite “gotten” the sound of the accent grave.  But then I looked up, and my question was answered…

…wrongly, but who am I to criticize a Frenchman’s accent?

Here are a couple more photos from my walk through the 19me:

Just for fun, I thought I’d share this sinister image I noticed on a roadside map:  A Spectre is Haunting La Villette!

There were some clouds the first few days, but the forecast is mouth watering:

The weather here is on the whole a bit more temperate than Boston, but otherwise remarkably similar.  Fall is my favorite season there, and so far it suits me here as well.

My first night, after a good dinner at La Bocca, I stopped by The Experimental Cocktail Club, which I had enjoyed last year with Rafael, and later with Michael Ǻhs.  It’s literally four doors down on my street, so hard to pass up!  It was quieter than last year, but the bartenders were charming and friendly so it was a nice experience.  Last night, after a Swedish movie and Persian dinner with Lisa and Ali I got home to rue Montorgueil around midnight, but the place was still hopping:

Rue Montorgueil at Midnight on a Tuesday

I’m determined to do a better job of exploring the night this year!