These past two years my cousin Lisa — so big a part of my Paris experience in earlier years! — has been in Uganda working on her Ph.D. She’s still looking after me, however, and she suggested a dinner with our mutual friends Ali and Zhizhong. We met at my place on Friday evening for an apéro, then ate at nearby Foodi, where I had dined my first night in Paris this year.

Ali, Zhizhong and me on our way to dinner.

There was a snafu about our reservation — I’ve found that smaller restaurants often don’t notice last-minute reservations made through the Fork — but we just had to kill half an hour at Hoppy, and then could be seated. 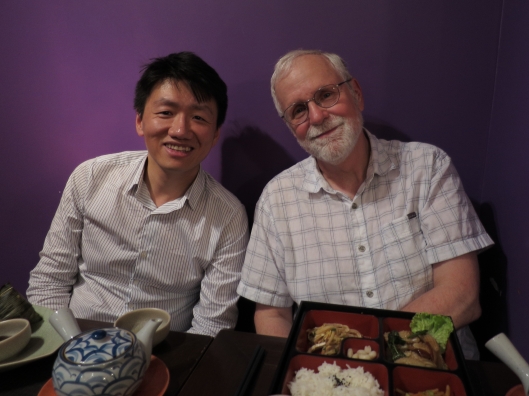 Zhizhong and me at Foodi (photo credit, Ali)

Ali and I had bento boxes, but Zhizhong was thrilled to get a traditional Chinese dish, Zongzi. In a beloved legend packets of rice were thrown into a river to distract fish from eating the body of a hero. 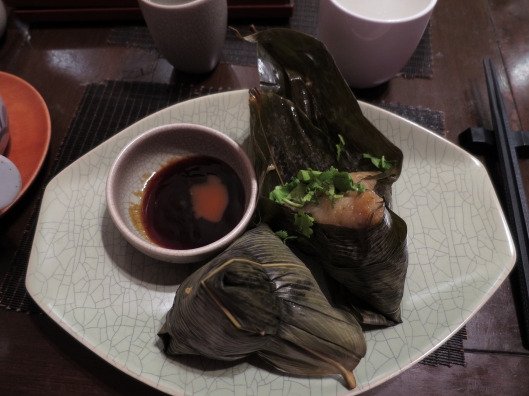 Ali headed home after dinner but Zhizhong and I got into a deep conversation, mostly about the opportunities, challenges and temptations of his new job. He’s working like crazy, but also coming into contact with upper levels of French business and society that raise all sorts of interesting questions. We used to have conversations like this back in Cambridge while he was working on his Ph.D., but this is the first really long talk we’ve had in the 3-1/2 years he’s been living in Paris. It was after 3 am by the time he headed home, and I staggered into bed!

I understandably got a late start on Saturday, then strolled over to the Palais Royal to do some reading.

Reading at the Palais Royal

I grabbed a quick and cheap lunch at Lina’s on Etienne Marcel, then strolled over to the left bank via the Louvre. You see teams of four heavily-armed soldiers all over Paris. Usually I’m reluctant to take their picture but I did take this shot to give you the idea. From one perspective they make me feel safer and from another perspective they make me uneasy. 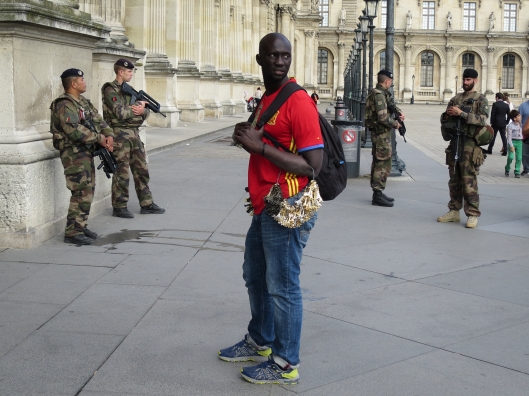 My destination was the little district of art galleries in the 6ème arrondissement near the École des beaux-arts. I had slighted this area despite my interest in art because I had the impression that these would be schlock galleries catering to tourists. There were a few of those towards the Latin Quarter but overall I was quite impressed with the quality of the galleries in this area.

After the galleries started closing I strolled across the Latin Quarter to rue Monge, and headed up to a student-run restaurant I had read about, the Foyer Vietnam, in the 5ème. Mysterious from the outside because its windows are frosted, inside it’s a simple and welcoming Vietnamese restaurant. The food was tasty and inexpensive, and I sat at a long table with other diners. Very much the kind of experience I was looking for that evening.

Both before and after dinner I strolled around the area. I had previously noted the neighborhood around métro Censier–Daubenton as one where I could envisage staying one year. The only real drawback I saw was the fact that it’s a bit of a hike to the Marais, which is these days more of an issue for my guests than it is for me. Nearby rue Mouffetard, which had charmed me on earlier trips to Paris, now seems trampled to death by the tourist hoards. Rue Montorgueil itself — while still attracting a lot of French visitors — seems to be going in the same direction. Where can I go to escape from … people like me?

On Sunday morning I blogged and got a quick lunch at Lemon. Then Guillaume picked me up and we traveled together to the banlieue of Saint-Denis to see a contemporary art show. Guillaume had worked in Saint-Denis on an assignment and his employer, a city planning arm of the Paris region, plans to move its main office there. I had previously been to see the basilica (which is most impressive) but hadn’t dared to venture deeper into the city. It was reassuring to have an experienced guide.

In prior years I’ve usually purchased a monthly Navigo pass, which extends on weekends, etc. to the entire Île de France region, including Saint-Denis. This year, however, I’m just using métro tickets, which only cover the inner zones of Paris. When Guillaume pointed this out at Gare du Nord we joked about the idea of my taking my chances on being “controlled” and required to pay a substantial fine, but decided to buy the correct tickets. Our virtue was rewarded, since there was a massive control operation at Saint-Denis! Dozens of police were writing up fines for people who didn’t have the right credentials, and catching people who were trying to escape the control.

The art show was supposed to be in an apartment building in a lovely location, right between the Seine and the Canal Saint-Denis. At first we went to the wrong floor and had a disorienting experience since nobody at all was there. 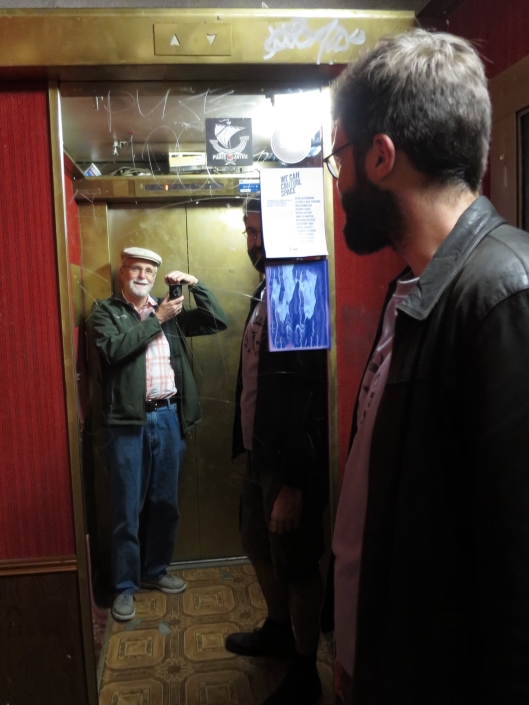 Selfie of me and Guillaume in sketchy banlieue elevator

But once we found the show it was normal and the organizers were friendly and informative. 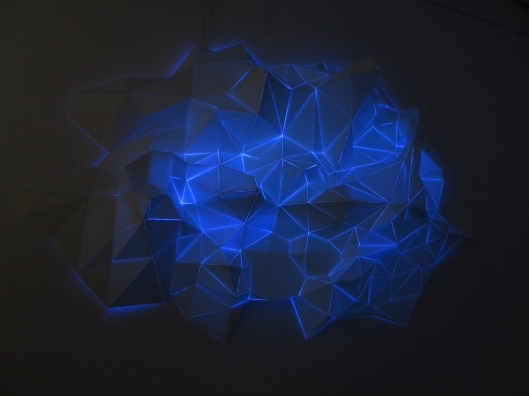 Reliefs, 2016 by Béranger Laymond at We Can Control Space show

The show organizers had said that there were also some exterior artworks, so after leaving the gallery we went around back. It turned out to be a sandy beach on the banks of the canal, where a cheerful young crowd was watching France beat Ireland in the round of 16 of the European soccer cup! 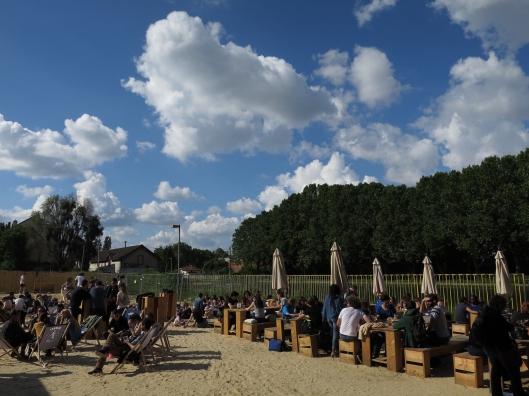 Afternoon on the beach … of the Canal Saint-Denis

This being France of course there was a bar, and of course we each had a couple of beers… After the match we got into conversation with neighbors at our picnic table and learned a lot about the building. The residents are mostly artists and other creative types (also, contrary to the prevailing demographic of Saint-Denis, mostly white), and they are fighting to keep control of the building. It’s really a gorgeous spot; the only little issue I noticed was the Roma (gypsy) shantytown across the canal. 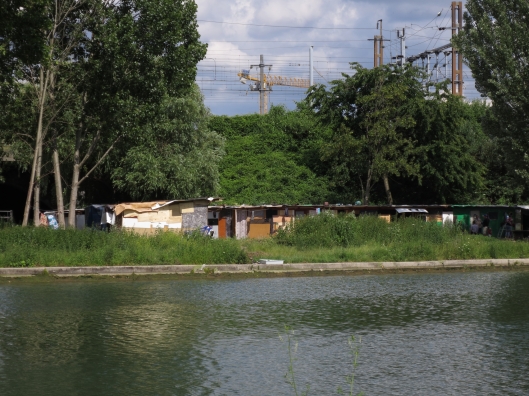 Roma shantytown across the canal

Guillaume explained that French racism against the Roma is even more intense than that against North Africans. There’s no immediate prospect of a Frexit, but the far right would love to use fear and hatred of immigrants to lever France out of the E.U. as well. Our conversation was in French, as at the dinner party in May. I had to ask him to repeat or explain a few times but on the whole I was able to keep up pretty well.

We said farewell at Gare du Nord, so I strolled over to the Grand Train, which I has first visited with Kristoffer the previous week, to see what it was like in nicer weather. It was a lot busier than last time, but all I had energy for was drinking a small beer and heading home for dinner and sleep.

Pizza restaurant at Le Grand Train. One of a dozen bars and restaurants.

Mot du jour: « bouche à oreille », “word of mouth”, but literally, “mouth to ear”, which I think is more evocative than our idiom. Not to be confused with « bouchon d’oreille », “earplug”.