Jared R stayed with me here in 2012, and Jared W stayed with me in 2013. They were partners for part of that time, and have remained good friends, but they’ve never been here together … until now! Jared R arrived for a ten-day visit on Saturday morning. After his lightning recovery from jet-lag we got together for dinner at the elegant Grand Bistro Breteuil in the 7ème. 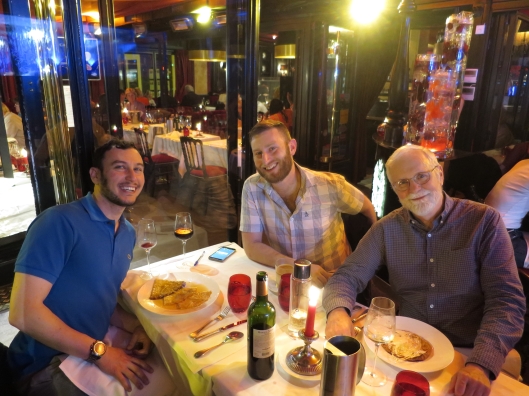 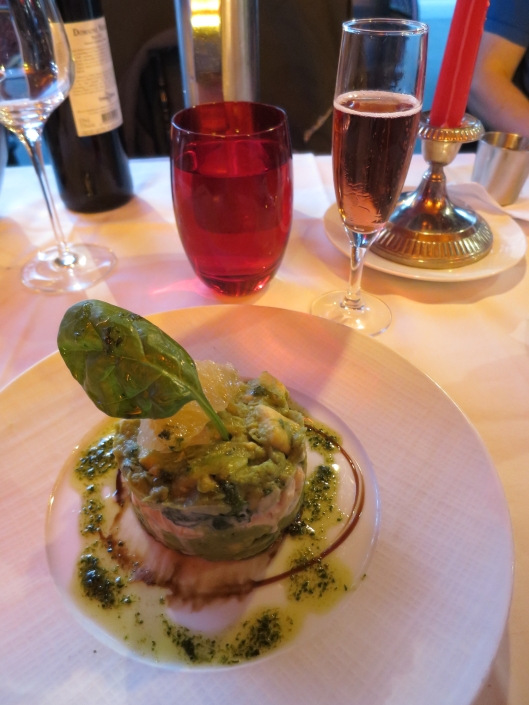 My delicious avocado and crab appetizer

We enjoyed the meal, and we particularly enjoyed being together for the first time in Paris! We all got the 44 euro fixed price meal (prix fixe in English and le menu or la formule in French), including an aperitif and a half-bottle of wine. I can’t fault the food or the ambiance, but I found the service at best underwhelming, and at times downright annoying. It’s part of a chain of four “Grand Bistro” restaurants, all in les beaux quartiers.

I have slighted the 7ème because of my impression that it was boring and bourgeois. I was surprised, nevertheless, to realize that in all my years of visiting Paris I had never been to this neighborhood. I had to admit that the wide, green Avenue de Breteuil, leading up to the gold dome of Les Invalides, was magnificent (albeit indeed 100% bourgeois).

Our plan had been to take in a museum after dinner, since it was the one night in the year when most museums stay open until midnight. We lingered so long over dinner, however, that there really wasn’t time. Instead we hopped an Uber up to Tango, formally known as (La boîte à frissons). It’s an utterly charming little place where gay and straight couples dance up a storm. There is occasionally an actual tango but the music ranges over anything that you can dance to — not including house or rock. There’s a warm and friendly ambiance that makes it much easier to meet people than in a typical gay bar. I was a wallflower because of my heel, but the Jareds burned up the dance floor!

At the end of the evening I grabbed a Vélib and cycled home.

Mot du jour: « les beaux quartiers », literally, “the lovely neighborhoods,” but usually referring to rich, bourgeois areas such as the 16ème and 17ème arrondissements, and also to the wealthy areas of the 7ème and 8ème arrondissements.