Mostly recovered, I set out on my first serious flâne in several days, to La Butte aux Cailles southwest of Place d’Italie.  This is a rather trendy area which has not yet been inundated by tourists. According to the historical marker, “This village without a church was settled by farmers, craftsmen and small businessmen, in a spirit of conviviality and liberty.”  Works for me! I found it a comfortable and lively area, one of a few places in Paris that I could see making my home for a month or two on another visit. 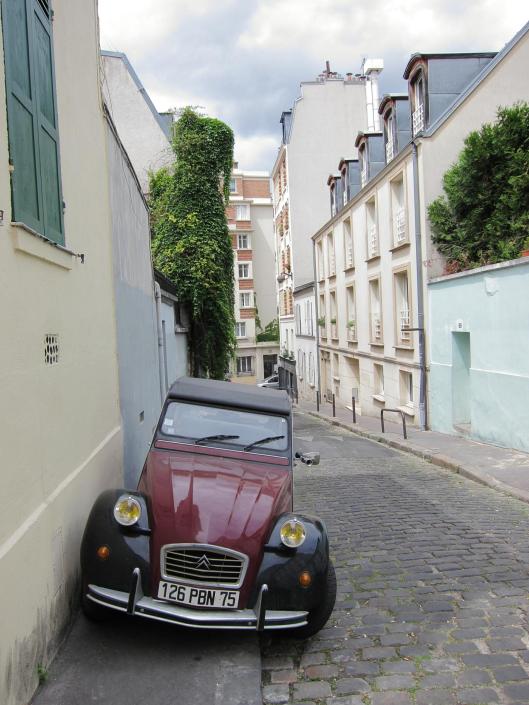 I particularly enjoyed running across the tiny headquarters of the Friends of the Paris Commune (1871), which was founded, I was told, by the communards themselves, and so was likewise celebrating its 140th anniversary. Among the items on display was the plaque memorializing those who lost their life in the Commune, originally placed in Père Lachaise cemetary.

I was delighted to acquire from this friendly staffer my first Paris souvenir:

I had planned to find a modestly-priced barber shop in a blue-collar neighborhood since I’ve been needing a haircut for a while. So where should I end up getting my hair cut but in Passy, one of the posh-est neighborhoods in the city? Oh well… At least I was able to enjoy a noisette afterwards on the patio of La Gare in La Muette — one of my favorite spots.

I was pleased with my ability to carry on fast-paced conversations en français with both the Friends of the Commune staffer and the barber. Both asked me where I was from but neither launched into English, or turned up their noses. Antoine’s ambition is to “pass” as an American when he speaks English but I will be content if I can just carry on a conversation; I’m resigned to the fact that I will never be asked what part of France I come from!

Standard meal tonight since the fishmonger boys were offering two fillets for 5 euros shortly before closing. The fillets this year have been rouget barbu, which roughly transliterates as “bearded redfish.” The actual English names for this tasty white fish aren’t terribly glamorous: “red mullet” or “striped goatfish.” I could care less what it’s called, however, so long as it provides the centerpiece of such a satisfying dinner.

Lovely again today, and warm enough for short sleeves (for about the fourth time since I’ve been in Paris).  I headed out to the Parc de Bagatelle, which had been suggested by my friend Richard Pillard.  I realized that the early spring flowers would have passed, and that it would be too early for their world-famous roses, but I was hoping that the irises would be in bloom. As it happened, most of the irises had been delayed by all the cold weather, but the early blooms were beautiful, and the park itself was very nice.  My best photos from the day are at Paris-15.  [I visited again, at peak for both roses and irises, in 2019. My photos from both years are in my Parc de Bagatelle Photo Set.]

An early iris at Parc de Bagatelle, with the park’s cute little Trianon in the background.

Instead of taking the bus back to Porte Maillot I decided to walk a couple of miles across the Bois de Boulogne to Passy and pick up the métro there.  This proved to be a very pleasant stroll, including the manicured Jardin du Pré Catalan and the upper and lower lakes.  Since I had a bit of time to spare I had a noisette on the private terrace of La Gare, a posh restaurant in a cute little former railroad station at La Muette.

I got back just in time for a non-alcoholic drink at Open Café with Rob, who I had been chatting with for a while on the Internet.  He is an American from Florida who has been living and working in Amsterdam for the past four years.  We had a good conversation and I made some suggestions about how to enjoy his week in Paris.

Then I joined a sweet Parisian friend for a beer and an authentic and delicious Thai meal at a nearby restaurant.  I had treated him to dinner at Le Loup Blanc (which closed in 2014) earlier in my stay, and this evening he insisted on paying for everything, even though he is still in graduate school.  Our friendship is mostly Platonic, since he is in a committed relationship (hence no name or photo), but it is nevertheless very sympa.  He is the only friend I have made here with whom I speak almost exclusively in French, which adds an additional touch of charm.

Two snafus have surfaced in the past few days, both involving my entering a date wrong — off by a day — in my date book.  One error occurred several weeks back when I booked my Prague trip and the other was on Monday.  I’ve hit an awful lot of marks over the course of this trip so I’m not unduly concerned, but if this sort of thing keeps happening I’m going to have to stay home and tend my petunias!