After a packed extended weekend it was time for me to slow down the pace. I had a minor stomach ache starting Monday evening and I had fallen a week behind in my blog, so for the next few days I mostly stayed around home and caught up on here. Lisa and Jackie had many missions on their last few days in Paris, so I was often on my own.

Jackie left on Thursday morning. It was really good to spend time with her again this year, and we both feel that our childhood friendship has been rejuvenated. Lisa, Aya and I had our final dinner together (Japanese takeout again) on Thursday night. I have always been “Uncle Bob” to them, so this year was more of the same, but Aya’s (usually) cheerful mood improved our interactions as well as those with her mother and grandmother. Friday was moving day: I helped Lisa and Aya take suitcases over to Ali’s nearby apartment to wait for their early morning flight back to Kampala, then I Uber’ed over to my new apartment in the 2ème.

My first two weeks in the 15ème paralleled almost exactly the start of last year’s petit séjour, including the same apartment and the same people. I had been aware last year that my cousins were all under various stresses, but I enjoyed myself nevertheless, and felt that it would be fun for me as well as helpful to them to repeat this year. Only after seeing how much happier they each were this year did I realize just how difficult their lives had been in 2018! It was a real pleasure to see each of them having worked their way through to a much better place. I don’t flatter myself that my presence had anything to do with this, but I do think giving the three generations quality time together in Paris was good for all concerned.

The weather in early May in Paris can be nice — it wasn’t bad last year — but more often it’s cold and rainy, as it was for the most part this year. There were sunny moments, but I was never tempted to wear shorts and rarely went outside without a jacket. My strategy before last year was to go somewhere warmer (Italy or the south of France) the first two weeks of May, hoping that the weather would be better when I arrived in Paris. The schedules of my cousins properly determined my schedule these past two years, but if all goes well Lisa will have returned permanently to Paris by next year, so I can go back to my southern strategy.

I normally average 7 miles of walking per day in Paris, well above my Boston average of about 4. In the 15ème this year my average was around 5, which was similar to last year. All three of my cousins also love to walk, but as a group we tended to stay fairly close to home apart from a few major outings. I was also slowed down last week by a stomach bug, and a need to catch up on blogging. I think it should also be acknowledged, however, that the 15ème, while authentically Parisien, doesn’t draw out the flâneur in me as much as more central areas. The streetscapes are typical and a bit predictable, the architecture is sometimes interesting but never really old, and the people themselves seem a bit, well, ordinary. I do love the complete absence — present company excepted — of tourists, but there’s a reason why they don’t go there.

While my mileage was on the low side I scored a home run in the sleep department. I aim for 7 hours a night as measured by my FitBit, which monitors heartbeat to analyze sleep states. I struggle to hit this target at home, especially in the spring, when it gets light earlier and earlier. In the 15ème, however, the sublime quietness of our courtyard and the marvellous effectiveness of the electric room-darkening shades combined to put me out for a full night’s sleep almost every night. I did have to put in ear plugs a few times when the birds started singing at 5 am, but no complaints.

My second apartment is really lovely, and well located near the bottom of rue Montorgueil, which I fell in love with in 2010, at the start of my first long stay. I wanted a bedroom so a friend could stay on the sofabed (or a couple could have the bedroom) but I couldn’t find anything fitting that description in the neighborhood. I “settled” for a two bedroom apartment with a sofa bed and a futon, potentially accommodating up to seven people! I feel a bit silly occupying it alone, but it will get a bit more use when Sherard visits the last week of May.

I took advantage of the excellent food shops along rue Montorgueil to make my “standard meal” from 2010, pan fried fish with haricots verts, fresh bread with olive oil, a salad and half a pastry. It’s like old times! 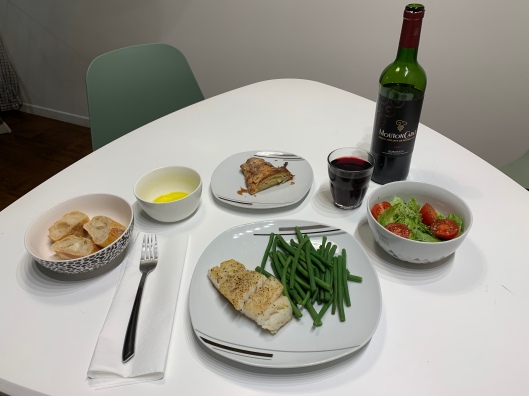 The fish, line-caught lieu jaune, from the poissonnerie Terroirs d’Avenir, on rue du Nil, was delicious! It was also punishingly expensive, but when I read the mouth watering description on their website I understood why. Follow this link if you read French, but here’s a freely translated excerpt:

Lieu Jaune is line fished by the fishermen of l’île Vierge, Finistère [“Land’s End,” the westernmost point of metropolitan France]. The fish, caught with lures, are lifted alive one by one to the boat, where they are immediately gutted, washed and iced. Single-caught fish do not suffer from excessive handling and are not damaged, and are therefore of remarkable freshness and quality.