Tourists flock to the cafés of St.-Germain-des-Prés, like Les Deux Magots, which were frequented by cutting edge artists and intellectuals in the first half of the 20th century. But they are long gone, driven away by those very tourists, and the higher prices they are willing and able to pay. Creative people will generally be found where rents and absinthe are cheap. Where is this now? Quartiers populaire like Belleville. This is one reason why I look forward every year to the Portes Ouvertes des Ateliers d’Artistes de Belleville (AAB) – Belleville Open Studios. I’ve enjoyed this event in several prior years: 2015, and most notably last year, 2018, with my nephew Andy. I had particularly liked two artists last year, Jean-Christophe Adenis and Sophie Herszkowicz. I was deterred by cost last year but this year I was able to find a small painting by Sophie Herszkowicz that displayed her talent and fit my budget. I’m jumping ahead of the story, however.

One cool feature of the Belleville Open Studios is that each artist contributes a small piece that is available for purchase, for 45 euros, in the AAB gallery at 1, rue Francis Picabia, M° Couronnes. Sherard and I got there just after opening, at 2 pm on Friday, to have our best shot at one of these. The small pieces that most interested me were already sold, but Sherard was taken by — and snapped up — an oil painting by Clem Letrusko of a pink crucified bunny.

Sherard with the small oil painting by Clem Letrusko (lower left) that he purchased on opening day.

The staff explained that we would have to return on Monday, the last day of the Open Studios, to pick up the piece, so that it could remain on display until then. This was of course no problem for flâneurs like ourselves.

Next, we looked at all the sample art works to decide which studios either of us wanted to visit. There were several that we both liked and several that only one of us liked, since there’s no disputing about taste. We circled each studio that either of us wanted to visit on the AAB map, then set out to see as many as we could that afternoon. We only saw a fraction of the 176 participating artists, even though we spent several hours on Friday, went back for a few hours on Sunday and explored for several more hours on Monday.

Here are some works that I particularly liked:

The studio of Catherine Arnaud, which I fell for in 2015. 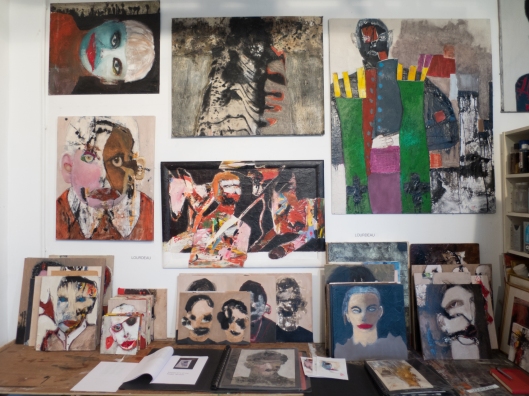 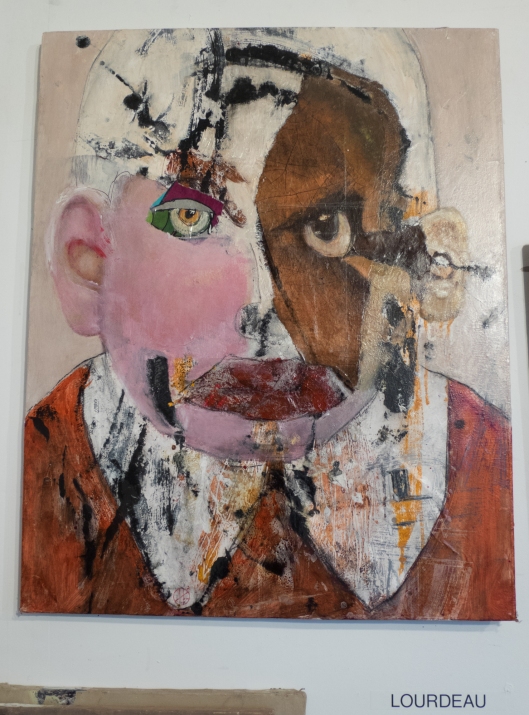 Scary portrait by Jean-Pierre Lourdeau. Sherard asked me why I liked it and I replied that I didn’t exactly *like* it but I was impressed and affected by it. Maybe not something I’d like to wake up to every morning but it makes me feel a certain kind of way.

Geneviève Baudoin in her Belleville studio

Sometimes the environment of the studio is as interesting as the art!

I’ll post separately for the artists we bought works from.

Update: Just for fun, here are similar photos that I took, one year apart. Le plus ça change !