As this year’s Paris visit winds down I’ve been saying goodbye to one friend after another. Tuesday evening I had my farewell dinner with Alexis. We realized that when we first met, in 2010, Alexis had just arrived in Paris after eight years in the U.S. So my petits séjours, and our friendship, have been almost exactly coterminous with his own time in Paris. It was most interesting to look back on our experiences here, as well as looking forward at where his diplomatic career is likely to take him next. 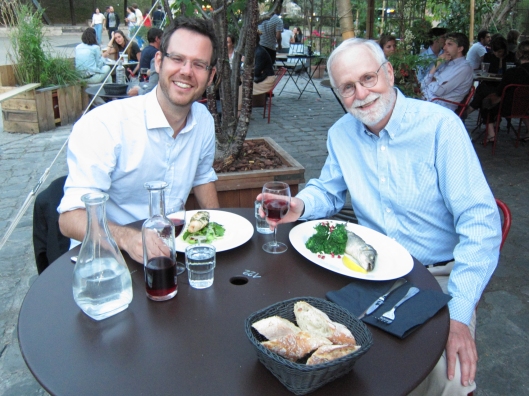 Alexis and Bob with dinner at La Rotonde, at the southern end of the Bassin de la Villette.

We ate at La Rotonde de la Villette, at métro Stalingrad. The restaurant is in a lovely building, one of the gates in the customs wall built in 1784 by the Farmers General, at the foot of the Bassin de la Villette. We got a nice table on the terrace; the food was good and reasonably priced; the servers were young, attractive and well-intentioned. What could go wrong? Alas, the servers were also completely disorganized. I would go there again, just being prepared for some confusion in the course of an otherwise lovely meal.

On Wednesday I did another walk from ParisInconnu.com, this time around the Place de la Nation, which I had never properly explored. It had been another of the gates in the Farmers General wall, which was otherwise demolished in 1850. The main feature is two pillars, one in the 11th arrondissement and the other in the 12th. But the very fact that there is no particular reason to visit Place de la Nation insulates it from tourists. 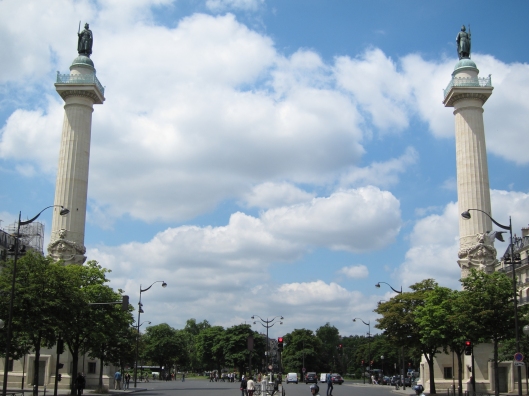 Columns built in 1787 at the site of the Farmers General customs wall, now Place de la Nation. The statues on top were added in 1845. 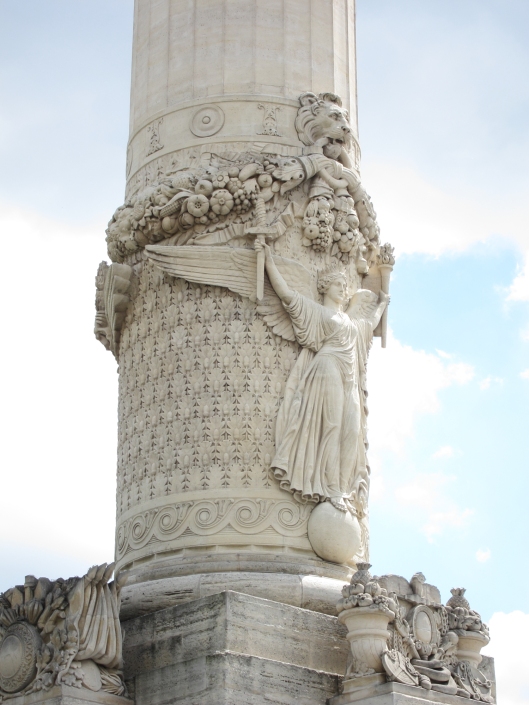 The view of the nearby Ledoux tower from my table on the terrace of Chez Prosper, Place de la Nation, Paris.

I was especially delighted to discover another delightful neighborhood restaurant, Chez Prosper, right next to one of the pillars. I had a huge tandoori chicken salad for 12,5 euros, which still came to under 20 euros including a generous glass of merlot and a noisette (espresso with a dollop of steamed milk). 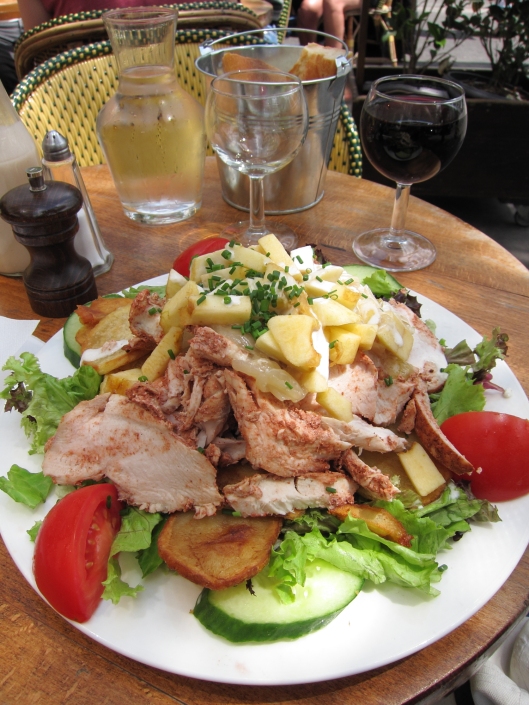 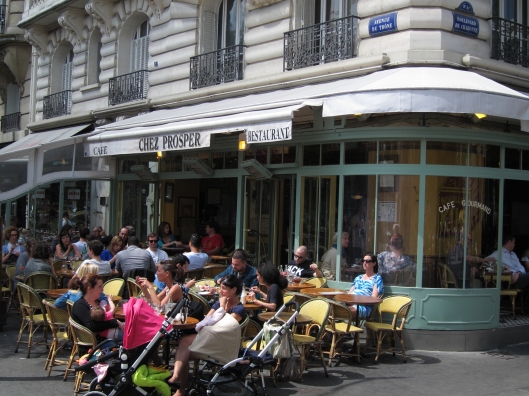 That evening Zhizhong came over for a quick farewell. He has been such a big part of this year’s trip! It was indeed a heartfelt au revoir.

Jaime had been scheduled to arrive on Wednesday evening, but his flight from Madrid was cancelled due to a French air traffic controller’s strike and he had to take an overnight train, which brought him in on Thursday morning. We walked around the Seine, through Palais Royale, then had lunch at Café du Centre on rue Montorgueil, my neighborhood from prior years. 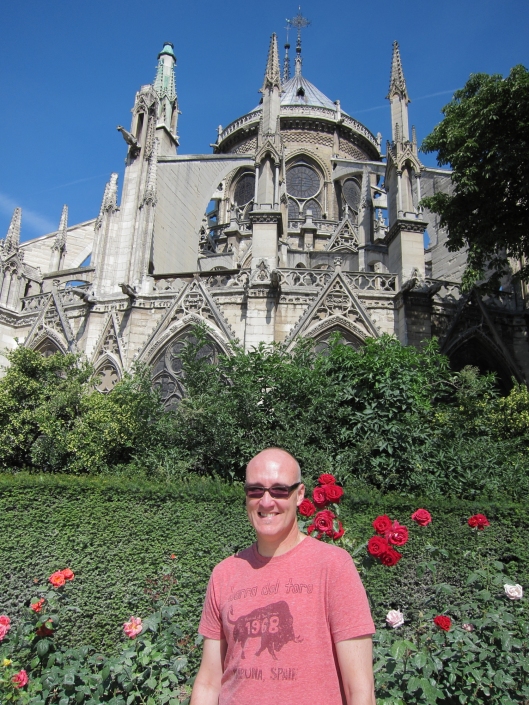 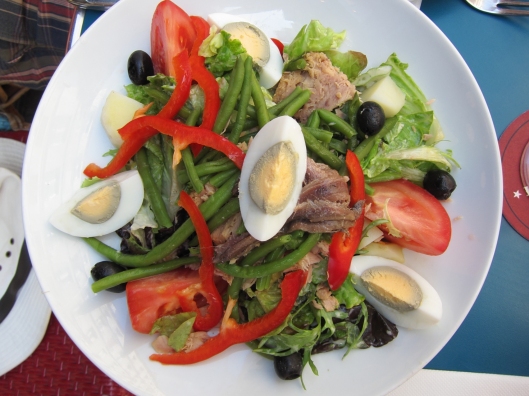 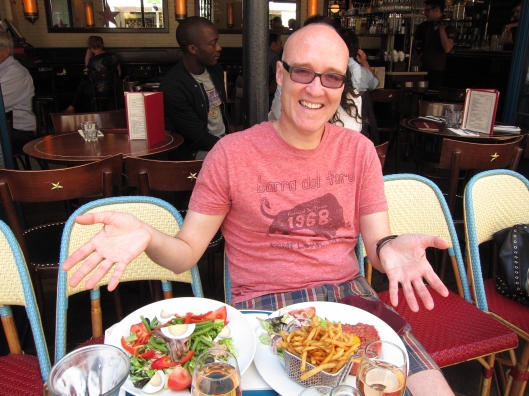 Jaime with our lunches at Café du Centre on rue Montorgueil. 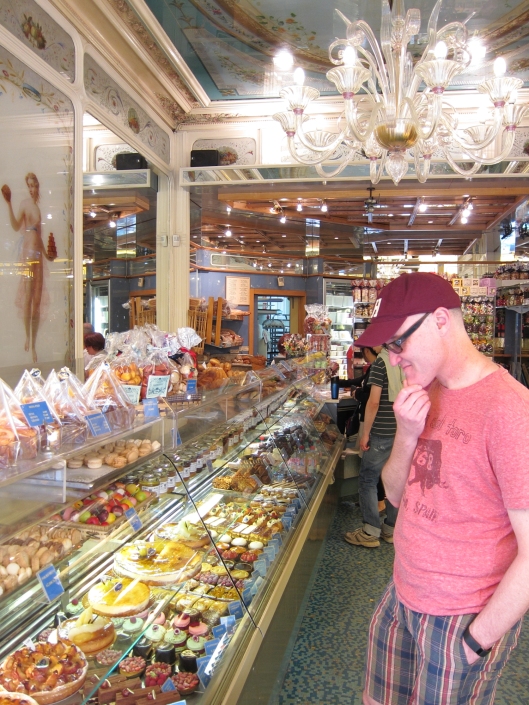 Jaime admiring the patisseries at Stohrer’s on rue Montorgueil.

Last evening my new French friend Sylvain joined us at my place for an apéro, then we went up to Nanashi in the Haut Marais for dinner. Sylvain had not previously been to the restaurant but he enjoyed his meal and I think he’ll be introducing it to his friends. 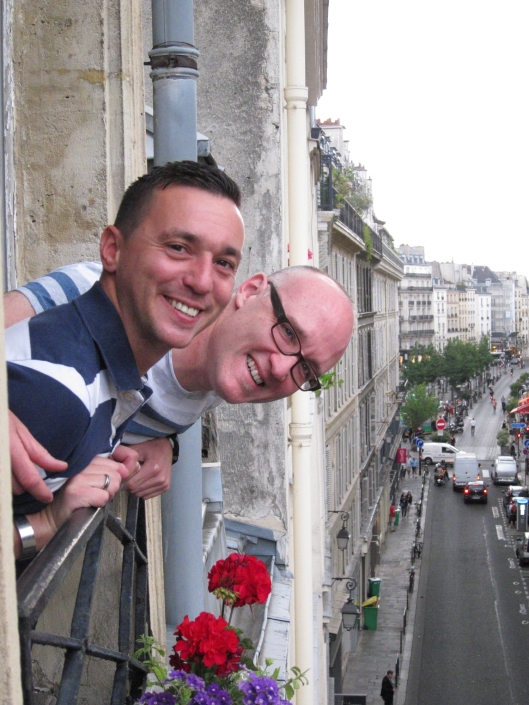 Sylvain and Jaime at the window of my 2014 apartment in Saint-Paul. 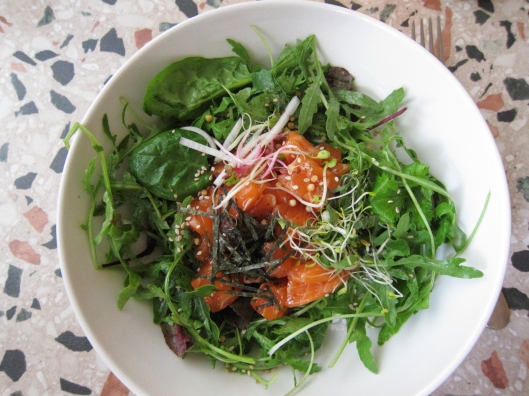 Bob’s delicious shirashi at Nanashi in the haut Marais.

After dinner Sylvain headed home and Jaime and I went to a very cool bar that Alexis had introduced me to last year, Le Comptoir Général. There was a fairly long line to get in, and it wasn’t moving, but after ten minutes someone from the bar pulled me and Jaime out of line and let us in ahead of everyone else! White beard privilege? At an African-themed bar?? We had a couple of delicious and moderately-priced cocktails while soaking in the scene and watching Algeria crush Russia with a 1-1 tie (?!?) in their World Cup match. 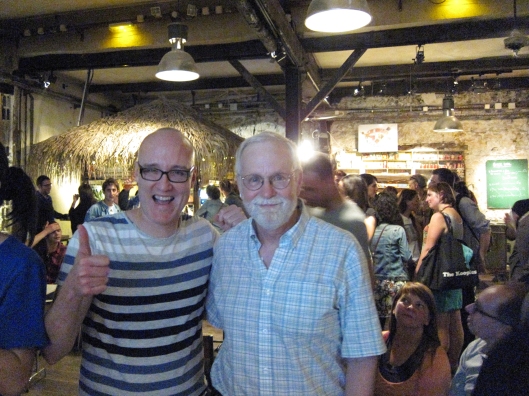 Jaime and Bob at half-time in the Algeria-Russia World Cup soccer match, at Comptoir Général. 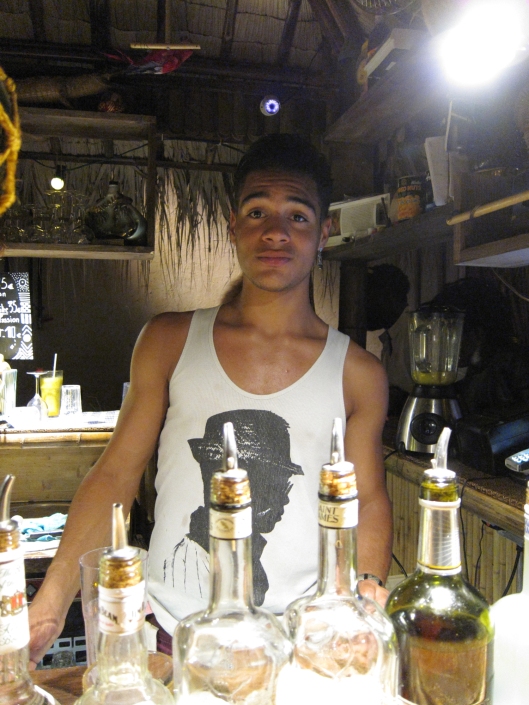 One of the handsome young bartenders at Comptoir Général.

It was after midnight when we tottered out of the bar, which is along the bank of the Canal Saint-Martin. As usual on a summer evening the banks of the canal were full of happy little groups of young people. I was shocked to learn that a new ordinance banned public drinking along the Canal after 9 pm, but pleased to note that it was being universally ignored. 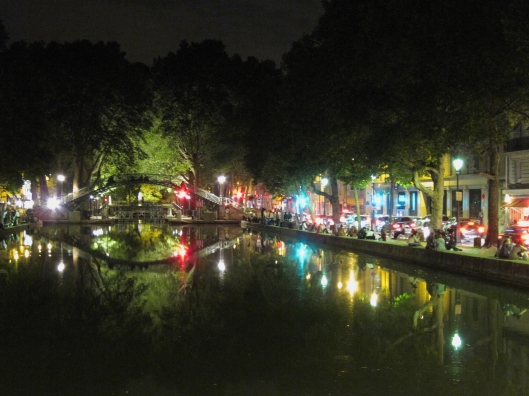 We caught the last métro home and called it a night.