On Tuesday night I caught up with my great friend Zhizhong for apéro and dinner. He is originally from China, and we became friends while he was working on his PhD at Harvard. When he finished school he decided — partly through hearing about my trips — to look for a job in Paris. He visited for ten days and fell head over heels in love. He has now been here just over three years; he has gone from a few words to fluency in French; he has encountered and surmounted many bureaucratic snags; and he has come to see the weaknesses of the French system. Yet as he puts it he is still in love with Paris, only now with a more mature love, that is also clear-eyed about the flaws of his adopted city and country.

We ate at an old favorite restaurant, La Bocca.

Zhizhong and me at La Bocca

The appetizers were enormous, probably enough for our meals, but the pasta was also too good to leave any uneaten. 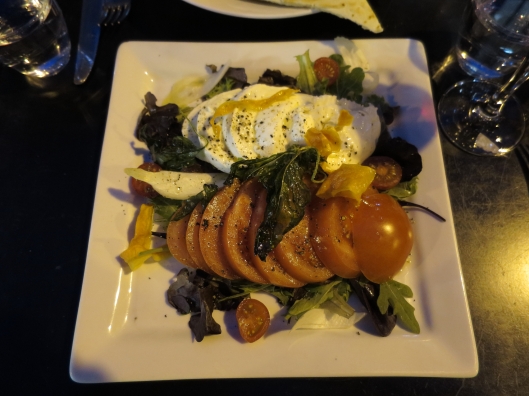 Probably the best calimari I have ever eaten, paired beautifully with haricots verts.

I’m sure Zhizhong and I will get together again a few times this spring, but he is moving this week, and is working so hard at his new job that I won’t be able to count on too much of his time.

On Thursday and Friday I met up for lunch with C.N., a friend from New York City who is in town for a few days. We first met four years ago and have kept in touch intermittently ever since. On Thursday we took a walk, then had a delicious Breton meal at Délices de la Lune, near the Grand Rex cinema.

C.N. with our galettes at Délices de la Lune.

On Friday, after visiting the Picasso Museum (in a future post), we had a Moroccan meal at the Marché des Enfants Rouge (The Market of the Red Children) in the upper Marais. 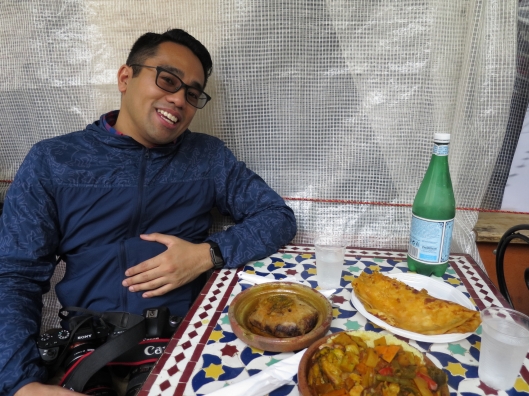 C.N, about to dive in to our Moroccan lunch at the Marché des Enfants Rouge.

C.N. is a part-time professional photographer and videographer (as well as being a full-time IT guy) so he is having a ball taking photos in Paris.

The poor little squirrel never had a chance.

Meanwhile, on Thursday evening Jared W and I met at Saint-Michel for a quick Italian meal, then heard a terrific piano concert — Chopin and Liszt — at the charming little church of Saint-Julien le Pauvre (the Poor). 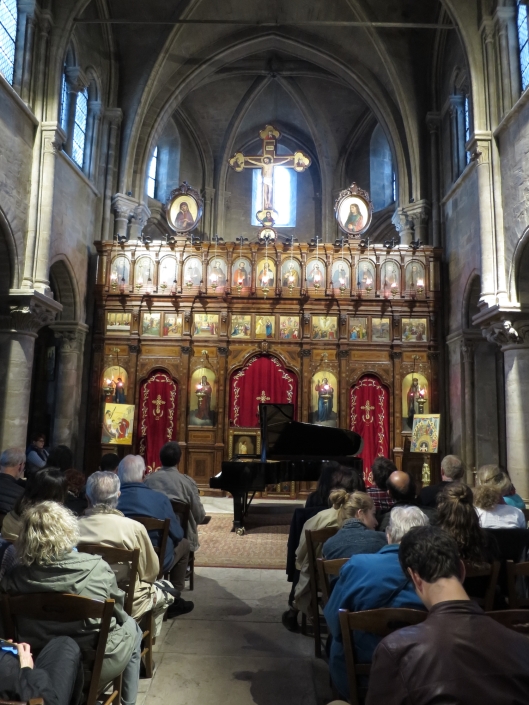 The concert about to begin at the church of Saint-Julien le Pauvre in the 5ème.

After the concert we walked over to the Marais, across the Seine, at l’heure bleue, when the light changes so rapidly.

After a drink at Quetzel, which was active but not crowded, we each grabbed Velib’s and headed back to our respective homes-away-from-home.