Friday we ascended the Eiffel Tower.  My nephew Andy and I had climbed to the second level on foot four years ago so it was a quite a luxury to be whisked up effortlessly this time.  The forecast had been encouraging when we reserved but it was in fact cloudy and drizzly (as it had been last time).  The views were still impressive, but they didn’t photograph well.  Gerry captured a terrific panorama, however:

Initially we were told that the elevator from the second level to the top was broken, and we would get a partial refund.  But happily it started working again so we got all the way up.  The height at the second level didn’t bother me, but I felt a bit uncomfortable on top.  It seemed as though the floor moved slightly as people walked on it, and the angles prevented you from seeing any supporting structure. 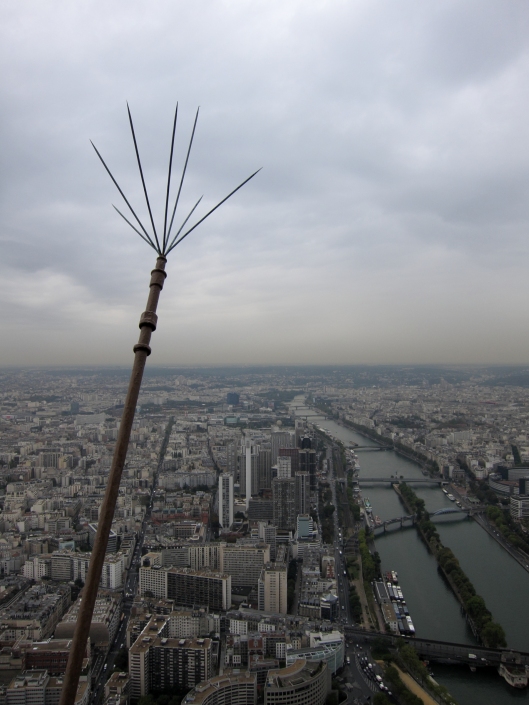 Dinner was at another of my old favorites, Le Loup Blanc (which closed in 2014).  We enjoyed the ambiance as well as the food, and an excellent half-bottle of Saint-Emilion Bordeaux.  I was pleased to re-establish my friendly nodding acquaintance with a particular cute waiter, who had seemed distant earlier in the trip.

After dinner Gerry and I headed over the Marais to further explore the bar scene.  We started at Spyce [Now Closed], which was jammed with an attractive mixed crowd.  One enters this bar through a small lobby, with two doors, each operated by a bouncer, that are never open at the same time. This is evidently to keep the music from disturbing the neighbors.  I asked two unusually hunky guys if they would be in a picture with me.  They graciously agreed, and only later did we realize that they were two of the evening’s three dancers. 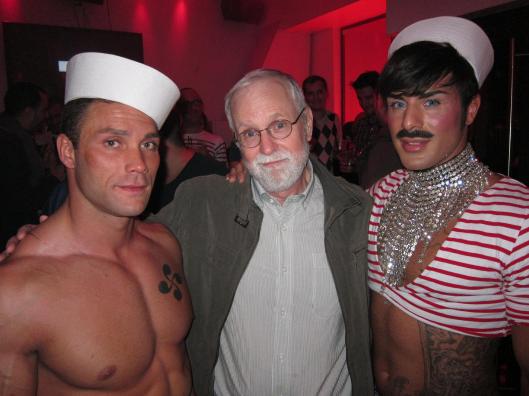 This only whetted our appetite, however!  We continued on to an even spycier club, Raidd, which specializes in “shower dances.”  Gerry boldly pushed through the crowd to get us a prime position near the shower stall.  Shortly after we were rewarded with a fine performance by a gifted young man.  I have cropped my photos so as not to épater la bourgeoisie, but in fact very little was left to the imagination.  Update: Here’s a video of a more modest shower dancer in 2016.

Saturday morning we slept in, for obvious reasons! When we roused ourselves I took Gerry on a walk across the Haut Marais to the Canal Saint Martin.  I took him via the linear park atop the last covered portion of the canal, and I invited him to puzzle out what the wire-covered ventilator shafts were there for.  Just as he was figuring it out we came on the tunnel opening and the first lock. 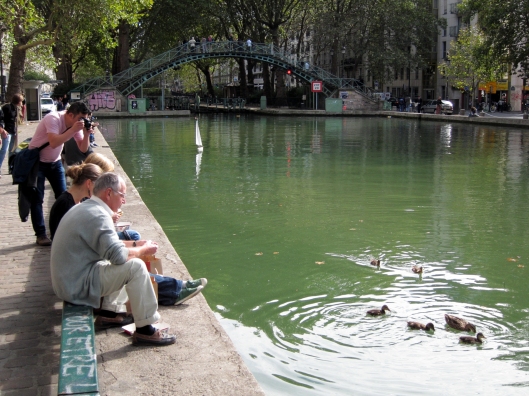 We had a very good lunch at Chez Prune, on the banks of the canal.  While there were other tourists there, it had an authentic-seeming bohemian atmosphere. 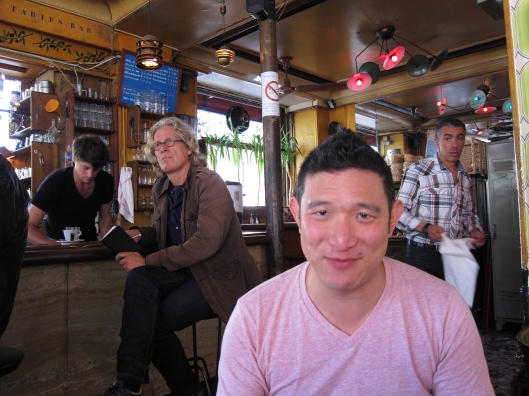 After a circuitous walk home and a disco nap Gerry took me out to Le Pré Verre, which I had enjoyed on previous visits.  While the food was good the service was brusque and sloppy.  The menu was both in French and English (though I admit that this was convenient), and none of the diners in our vicinity were French.  I realized that this restaurant  is predominately fed by its Rough Guide listing, where I had seen it four years ago.  What seemed like an insider’s secret then now seemed relatively banal.

After dinner we walked along the Seine to — of all places — the Palais Royal, to try out yet another bar, Club 18. We were a few minutes early so we strolled around the area until midnight, when it opens. 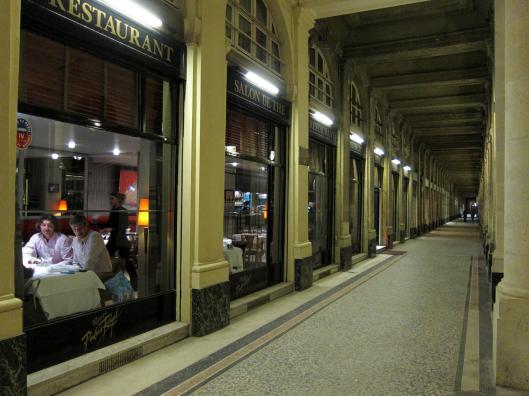 It initially seemed odd to find a gay bar in a place so steeped in history and literature, yet even in Balzac’s day the area was a hotbed of gambling and prostitution, so I guess it’s not really so different.  The club has a tiny dance floor, but an amazing number of guys managed to squeeze their way in.  At times it seemed as though it should have been called “Club 16”, but there were other older men and on the whole it seemed more friendly and comfortable than not.  We danced until about 2:30 am, then strolled back to rue Montorgueil.  Several bars and cafés were still open, while others were just closing up.

My own assessment is that Duplex and the Open Café seem to offer the best chance for conversation.  Spyce [now closed] and Raidd have the hottest dancers, but eye candy gets old rather quickly, and guys primarily drawn to that form of stimulation are less interesting anyway (present company excepted).  Club 18 is a really fun place to dance if you didn’t mind being jammed in like sardines, and the crowd was very attractive, even though in some cases actually too childish-looking.  On the whole, the Paris gay scene is good, and I can imagine going back to any of those places at some point or another. 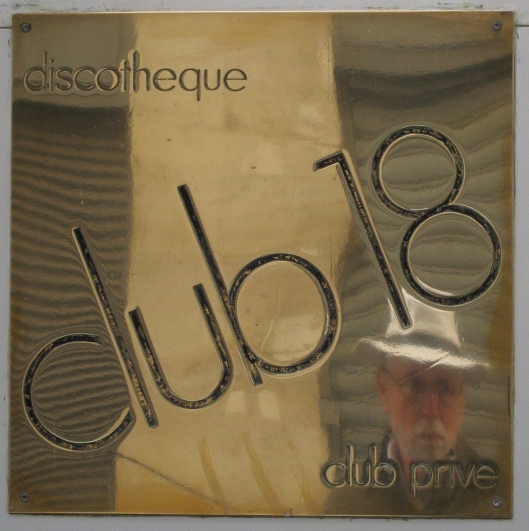