After my second spring in Paris I was determined not to become “the guy who goes to Paris every spring.” But of course I now am that guy, and it isn’t so bad. Now if I ever decided to stay home for May and June my family and friends would be surprised and concerned. So, yes, I’m going back!

I was unable to rent the fabulous apartment I was in last year because the owner is using it himself for most of June. I’m on good terms with him, however, and I do hope to be able to stay there again another year.

The rental process this year was quite frustrating! After learning that last year’s apartment wasn’t available (despite appearing so on the web site) I made an offer on another place but didn’t hear back for several weeks (admittedly over Christmas). It turned out that Paris Attitude couldn’t receive emails from me with attachments, including any reply I tried to send to a message from them which had attachments. This led to a lot of misunderstanding and unhappiness! Especially when it turned out that the second place had also slipped through my fingers! Eventually I started calling them instead of emailing, and after I figured out what was going on I was able to send attachments by mailing to the broker’s gmail account. As an I.T. professional I was underwhelmed!

Fortunately, I ended up renting a very nice one-bedroom apartment in the same neighborhood as last year, arriving May 12 and leaving June 30. Full details on the apartment are at this link. 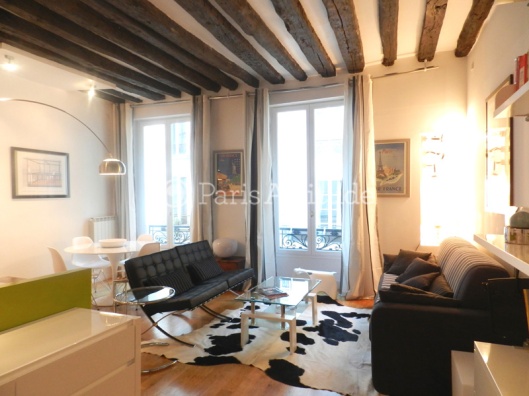 It’s the same price, and broadly similar, although I was so spoiled last year that I couldn’t help noticing some differences:

Like last year’s place the apartment is fully furnished, and has Internet, wifi, washer, drier and dishwasher. Neither have microwave ovens, so I will either do without or get a cheap one again this year. Each unit has a sofa bed in the living room, a modern bathroom, and a separate toilet. Both places have through ventilation, with living room windows on the street and bedroom window on the courtyard. This year’s place doesn’t have many advantages over last year, but I do like the ceiling beams (poutres exposées), which I missed last year. [Updates on how the apartment turned out are in the next post.]

Kvetching aside, this year’s apartment looks lovely and comfy. I look forward to settling in there, and welcoming visitors to join me!